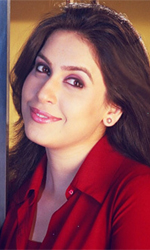 As the title suggests, "Detective Naani" is a simple story about a granny (Ava Mukherjee) who has those intrinsic detective traits to her. She may not be trained like the CID officers she comes in contact with as the story progresses, and nor is she expected to be physically agile like youngsters.

Still, this 75-year-old lady has decades of experience behind her and a `strong instinct` factor that makes her see things that others may ignore.

This is where the film`s basic plot comes into the picture as `naani` suspects something fishy going on in her neighbourhood. She has a strong reason to believe that children in her locality are going missing. But no one wants to believe her. Her approaching the cops too proves to be futile and it is left entirely to her to get her own team - a bunch of youngsters, her grandchildren and a few other friendly neighbourhood folks - together and solve the mystery.

But this journey to the bottom takes its own time and it does become a little tiring intermittently. All you want to know is the `what`, `who`, `where` and `why` behind the mysterious happenings but filmmaker Romilla Mukherjee brings in other Bollywood masala elements to overtly dramatise the affair.

However, as is a mandatory requirement of any suspense flick, the end should keep you interested in the proceedings and this is what happens in case of "Detective Naani" as well. After a good beginning and an average middle portion, the last few reels manage to pull back the movie, saving it from being an entirely lame exercise.

What impresses most about the movie are the tricks that `naani` applies to find the culprits. The clues that she detects to move a step ahead may not be the kind that one finds in the theory book, but they have a practical touch to them.

From the performance standpoint, the film was meant to be the `naani` affair all the way and Ava Mukherjee doesn`t disappoint. Though a known face on the commercial circuit, she has been doing films only sparsely - she was earlier seen in "Darna Zaroori Hai" and "Devdas". "Detective Naani" is the first time that she has been seen as a protagonist in a Bollywood flick.

Ankur Nayyar as the CID officer does quite well too though he comes with the disadvantage of appearing in a film where he primarily has a supporting role.

The film`s music is boring, though the background score is reasonably good.

It`s easy to dismiss a film based on just the title, genre and the star cast. The same applies to "Detective Naani", which arrives sans any promotion, has unknown faces and isn`t quite forthcoming of its genre - is it comedy, a family film or a thriller?

But if one keeps all these aside and focuses just on the story and its execution, it`s not a bad watch at all. "Detective Naani", which has first-timer Romilla Mukherjee taking up the multiple responsibilities of a producer, director, lyricist, composer and screenplay writer, isn`t the summer kiddie flick that you were waiting for.

Still, if you have absolutely nothing else to watch and are through with your daily dose of IPL, "Detective Naani" is all right for lazy weekend viewing.