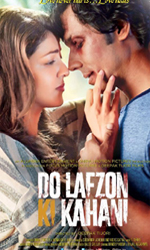 Adapted from the 2011 released South Korean film "Always", "Do Lafzon Ki Kahani" is the love story of a soft-hearted boxer named Suraj (Randeep Hooda) and a blind girl (Kajal Agarwal).

Narrated in a non-linear fashion the plot, which unfolds meticulously and intriguingly in a contrived manner, relies heavily on fate or coincidences to propel it forward.

Set in Malaysia, Suraj is an ex-boxer with a haunting past. He multi-tasks and works two shifts a day to keep himself occupied. It is when he is working on his second shift, as a security guard in a parking lot, that he forges a friendship with a vivacious blind girl named Jenny Mathais, who drops into his cabin for a popular Indian TV show "Main Bindiya Tere Maathe Ki".

As their romance progresses, Suraj seeks forgiveness from his friend Omi (Mamik) and his ex-gym owner. It is then that we are given a glimpse of Suraj's violent past, his reformation, redemption and love story.

Jenny too has her share of secrets, about her parents and how she became blind. After all secrets are ironed out, Suraj decides to make amends and start afresh. This includes gathering funds for Jenny's eye operation.

And what he does as repentance and for his love, forms the crux of the tale.

As usual, Randeep Hooda shows great passion for becoming his character. He nails his role as a compassionate, yet rugged boxer, Suraj. He delivers heft, as well as beefcake, and transfixes you in his pivotal moment of transformations.

Kajal Agarwal too is sincere and like many actors portraying blindness, she portrays a glazed-eye look efficiently and yet manages to imbue her character with a touching veneer.

Mamik Singh is wasted in an insignificant role as Suraj's friend Omi.

Girish Damija's script has a heart which moves on a slow pace. The narrative lingers effectively. While Randeep's character is well-etched and rounded, Jenny's part floats on an ambiguous scale - from a blind school teacher, teaching students clay moulding to a physiotherapist.

Technically, the film is well designed. Mohana Krishna's camera work is steady and noteworthy. His frames, captured from various angles, artistically arrests the visuals, which include Randeep's haunting performance. And his tight frames are manipulative.

The music by Aruna Harjai and Ankit Tiwari seamlessly meshes with the narration. The songs are lilting and mellifluous and bring out the essence of the moments.

Overall, "Do Lafzon Ki Kahani" is a sentimental film that will woo any romantic.

Korea dominates Bollywood this week. Barely had we gotten over Anurag Kashyap wondering if we live in North Korea (we don't, the Information and Broadcasting Minister has assured us), there come two Korean remakes on the same Friday.

The far superior "TE3N" reprises the Korean film "Montage". The other new film "Do Lafzon Ki Kahani" is actor-turned-director Deepak Tijori's heartfelt adaptation of the Korean film "Always", about a disgraced guilt-stricken boxer and a happy but visibly impaired girl whom he falls in love with.

The theme has been done earlier in films as far-ranging as Douglas Sirk's "A Magnificent Obsession" and Gulzar's "Kinara". Deepak Tijori is unable to whip up a powerful concoction on the pain and suffering of two opposites locked in a love relationship.

Sooraj has a past. Since he's played by Randeep Hooda, this past angst is pinned down to the narrative with persuasive energy. Randeep`s coiled clenched performance nourishes the arid areas of Tijori's narrative. His scenes in the boxing ring have more punch than the film's romantic backbone. The actor is far more well prepared than the script.

Kajal Agarwal drags a dollop of sunshine into a film that constantly plunges into a morose mood. Her Jenny is blind yet able to see what the eyes often miss. Kajal plays the girl without a shred of self-pity or regret. A truly inspiring performance in an otherwise staid telling of a tale of a blind girl and the redemptive journey of the man responsible for her predicament.

There are undoubtedly some magical moments between the lead pair. The lovelorn looks Randeep darts at Ms. Agarwal are worth their weight in gold. But the film comes a cropper while negotiating its way through the lovers' lives. Their tiffs convey a sense of believability, belied by the script's constant dependence on romantic clichés to carry the narration forward.

Nonetheless, the lead actors share some genuine warmth. Unforgivably, the music given to nourish their soul is uneasily anaemic. With fresher dialogues, more credible situations and a less clunky attitude to that thing called love, "Do Lafzon Ki Kahani" could have been a far more gratifying ode to romantic yearnings.

Centered on ex-mixed martial arts artist Sooraj (Randeep Hooda) and sculptor artist Jenny (Kajal Aggarwal). Their fate intertwines when their past are revealed in their blooming relationship. 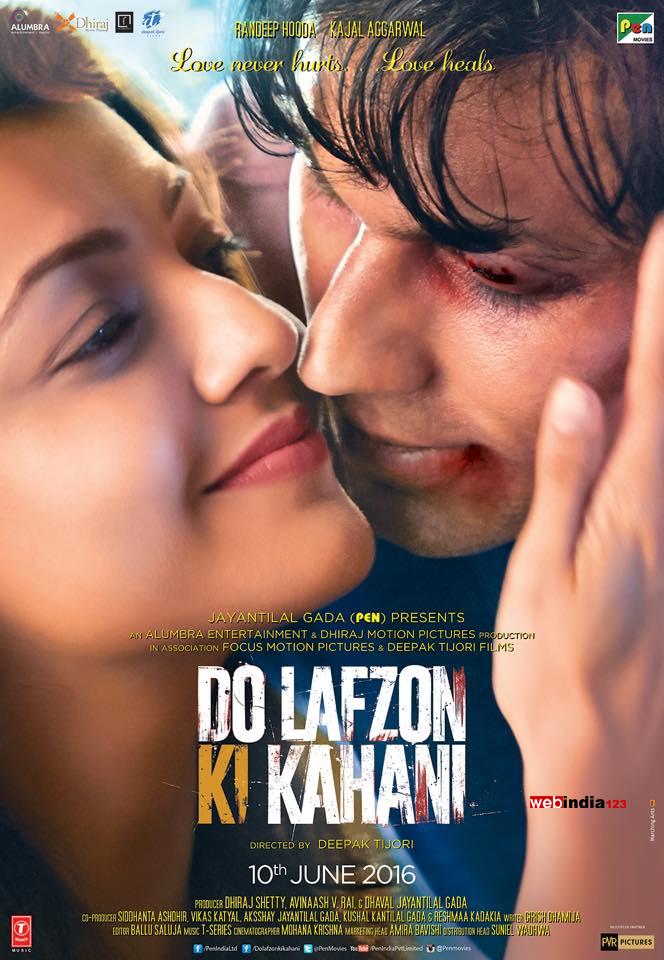 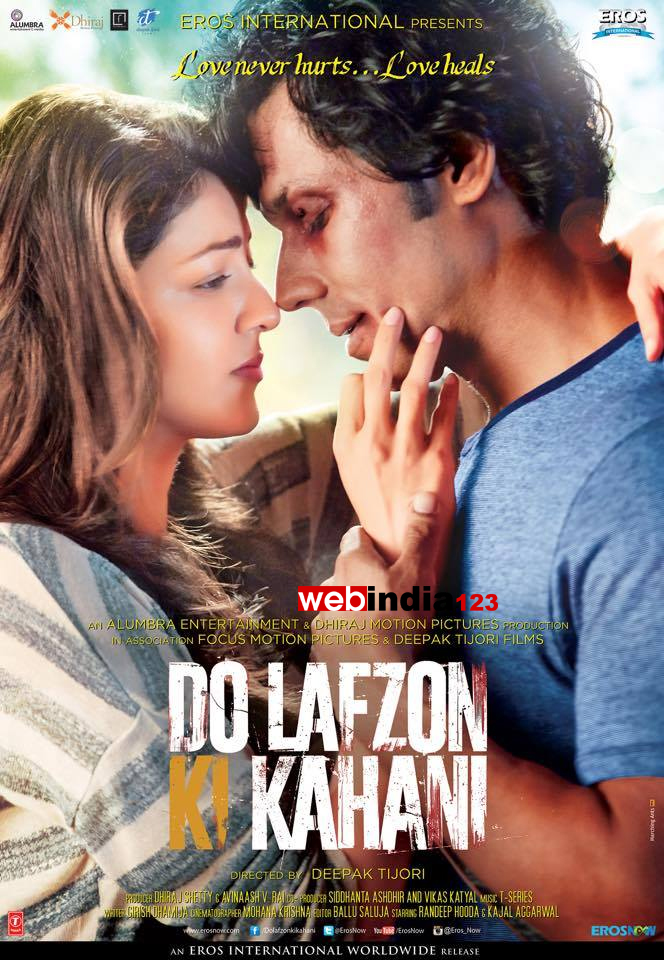