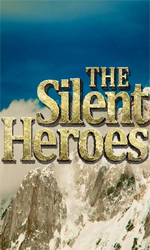 It is the poster of this film which will probably catch your attention. It states; "The Silent Heroes - A Mahesh Bhatt film". Crafty, but true to its words, the film is written and directed by a journalist-turned-film director, Mahesh Bhatt and not the legendary film maker of the same name.

Nevertheless, the film, like the original Mahesh Bhatt's films, touches an emotional chord. It is an inspirational tale of 13 deaf children, who abandon their basic mountaineering course to save the life of their injured and unconscious instructor.

Stranded in the Himalayan wilderness, two days and an eight-hour trek away from humanity and with no other adult company, it is the resilient choices of these children, that make them the "Silent Heroes."

With no renowned cast or crew, what holds your attention are the "differently abled" children who charm their way into the hearts of the audience with their natural performances.

But unlike films like "Taare Zameen Par" and "Stanley Ka Dabba", this film is treated like an adventure-thriller and offers some nail-biting moments too, especially in the Himalayan rapids.

The visuals of Roopang Acharya, director of photography, need a special mention. With moderate production value, he has captured some underwater frames, effectively.

Composer Ashish Jha's background score complements Rahul Mishra's music and lyrics. Together, their work is motivational, as well as inspiring. Every song meshes well with the narration and is effectively used to create an effective mood.

The only issue with this straight forward tale are the unwarranted sub-plots that complicate the narration.

They not only break the momentum of the story, but also tends to confuse the audience.

As for the pacing, the first half of the film is a breeze, whereas the second half fraught with emotional and physical endurance exercises, drags a wee bit.

The scene in which Hima, the instructor, urges the children to head back to the base, seems a tad pretentious and unreal and is jarring from the otherwise natural feel to the film.

The director has obviously managed to extract good performances from the children, who are a treat to watch. Their sincerity comes through in each scene. In fact they outshine their older and professional co-actors.

Watch, this film for the effortless and delightful acting by the children. They truly are the Silent Heroes.

In the misty environs of Uttarakhand amid mighty Himalayan peaks, Kapil Malhotra, an ex army officer trains local kids in mountaineering and search & rescue. Gauri Singh, a school teacher in a deaf school approaches him with an offer to train the children in her school for a mountaineering expedition; children who are considered handicapped by the society due to their hearing and speech impairment.

Kapil readily accepts the proposal. He selects 13 students from the deaf school and takes them to the Nehru Institute of Mountaineering (NIM), Uttarkashi for advanced mountaineering training. This initiative of NIM is highly appreciated by local and national media.

Sailing is however not smooth for these children at NIM. Hima Singh, an accomplished Instructor at NIM doubts the decision of Principal Col. Thapa to enroll these children in mountaineering course. She firmly believes these children to be good for nothing and totally unfit for a course that is physically challenging and mentally demanding.

Due to some unforeseen circumstances, Kapil gets injured in a freak accident and Institute ends up sending Hima with the children for their final expedition in the Himalaya; completing which is a pre-condition for their becoming a certified mountaineer.

Himalaya soon starts to take its toll. Slight misjudgment and negligence drops Hima off the cliff and soon her injuries start to get worsened and she ends up unconscious and immobile.

13 deaf children thus get stranded in the wilderness of higher Himalayas with their Instructor unconscious and fighting for life. They have no means of communication with the base camp. Their dream of becoming mountaineers is thus in jeopardy.

Choices are not easy to be made and stakes are higher than ever. The Silent Heroes is all about the choices these deaf children make silently but boldly. The choices they make have much in store for the whole deaf community.