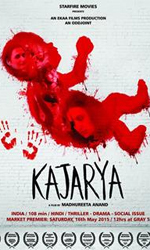 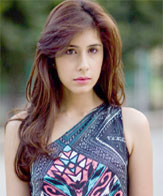 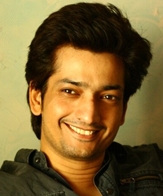 A fiction narrated in a neo-realistic documentary style, Madhureeta Anand's "Kajarya" is a crisply told, resiliently chilling story that is both disturbing as well as engaging.

The film delves into the implied view of life and conduct with respect to female infanticide in the Indian society.

Meera Sharma, a disinterested rookie journalist, working for the National Times, is sent to a small village in Haryana about 80 km from Delhi, to cover a ritual that takes place on the eve of the full moon night at the village temple which is dedicated to Goddess Kali.

In the village, she learns that the said ritual involves 'bali', a human sacrifice. On further investigation, her path crosses that of Kajarya, the woman who under the influence of opium, is forced to embody the goddess in fake religious ceremonies.

While the story hooks you with the two perspectives of the theme, that of the urban and the rural point of view, it also gives an insight into how the Fourth Estate callously and insensitively handles this heart-wrenching subject.

The fascination aspect of the film lies in its two main protagonists: Kajarya a victim of circumstances, who is an unusual but effective mouthpiece against the barbaric practice, and Meera Sharma, the ambitious and immature, cocky reporter who lends a fine balance at the other end of the spectrum.

On the performance front, Meenu Hooda as the dishevelled, weary and intensely brooding Kajarya, is brilliantly outstanding in the title role. She portrays the character sincerely.

She gets into the skin of her character by constantly spouting cuss words to vent her anger on her fate and circumstances.

Ridhima Sud as Meera Sharma is natural. She represents the aggressive immature journalist to perfection.

Both of them are aptly supported by Kuldeep Ruhil as Banwari, the slimy catalyst between Kajarya and the villagers; Summet Vyas as Nikhil - Meera's boyfriend; and Shashi Bushan as Shambhu - Kajarya's silent pillar of support.

While the subject is intense, Madhureeta's writing seems forced. The screenplay stresses and succeeds on building a strong inconclusive narrative, where the third act of the plot seems to be hurriedly wrapped with both Kajarya and Meera's transition lacking depth.

A oft repeated dialogue like "Tum Kaali ke saath khelo, Kaali tum se khelengi (Play with Goddess Kaali and she will play with you)" is only for effect and not substantiated.

Also with Kajarya's lawyer assuring her, "Bharosa rakho, bahut achha hoga, jo bhi hoga (Have faith, whatever happens will be good)", the film takes the lazy way out to assure a person and conclude the conflict.

Visually, Madhureeta's direction transports you to the rustic village in Haryana with Amardeep Behl's production designs, Urvashi Bhargava's costumes and Alok Upadhyay's cinematography. The visuals are basic except for a few shaky frames at the initial stage.

The canvas is bright and pleasing to the eye and is efficiently layered with Richard Horowitz's enchanting background score.

Overall, the film is worth a watch.

'Kajarya' is a film about the force of circumstances and how they make people who they are. And that it is only our personal choices that actually define the outcome of the circumstances. Kajarya and Meera are two absolutely different women,from two different worlds. Kajarya is an uneducated woman who lives in an Indian village. Meera,an educated, modern woman who lives alone in a city. Meera is a global citizen. She could be living anywhere in the world.

Ordinarily, the lives of these two women should never have crossed. But circumstances bring the two together and lock them in to an orbit that neither can break out of. Like planets they are caught in each other’s energy field almost without their willing.

At another level, Kajarya and Meera’s circumstances are defined by the time and place of their birth. And yet the society they live in judges them for their actions. And so the film also looks at the deep societal hypocrisy that collectively supports something heinous and ugly and pushes everything under the carpet. And then stands on judgement of those who have been forced in to positions they did not really want.

Kajarya is a metaphor for that ugly side of society that everyone wants to hide.