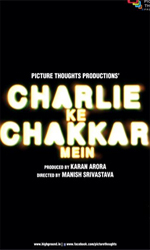 The film follows the investigation of multiple interlinked homicides that occurred in a city. The police find video footage of events prior to the murder and they try to solve the case based on that.

The footage is lined up in sequence to give a faint idea of the trail of events. Following this, a few suspects are rounded-up and their versions interlock the plot.

The script is written by Manish Srivastav and Amit Sial. Gilded with a heavy philosophy about perception and truth, in actuality, the film with its oft-repeated sequences, unravelling bits of truth, is a convoluted and complex drama.

What starts off as an intriguing murder mystery film, soon with its complicated tale, turns into a predictable yarn with numerous - characters, sub-plots and versions.

The characters are cardboard thin. There is no common thread between the five friends. Sam (Amit Sial) is a drug peddler who has a soft corner for Nina (Manasi Rachh) an aspiring actress. She in fact, is dating a fellow wannabe actor Deepak Kay aka Dips (Amit Tiwari). Patty (Anchal Nandrajog) has a soft corner for Sam and Jeevan aka Jeeves (Nishant Lal) is a hopeful director who is sex-crazed and constantly recording events with his video camera. They exist because the writers perceived them to be.

And the rest of the cast are present due to causality. Hera (Disha Arora) is a voluptuous beauty who catches Sam and Jeeves' fancy. Jabbar (Siraj Mustafa), Sohail (Subrat Dutta), Husaini (Vikas Anand), Rahil and Sayed are a part of the drug mafia.

The dialogues are everyday lingo with jargons used in the drug-peddling circuit.

The performances of the five hyper-panicky friends, constantly before the video camera, are theatrical and overbearing. Every scene of theirs seems staged.

Naseeruddin Shah with his pseudo mannerisms, a heavy-duty title, investigating a mundane case and showing keen interest in solving it, is predictable and thus a wet blanket.

Auroshikha Dey as the "protocol" following, investigative officer is perfunctory, whereas Sandeep Vasudevan as the ever-obliging yes-man to Sanket Pujari, occasionally elicits a chuckle or two. The actors playing Rahil and Sayed stand out and are worth a mention. The rest of the cast is stereotypical.

Overall, with its narration going in circles, this film fails to engross viewers.

Our life revolves around perception of truth as we act only on our ability to judge it. Truth though is a fickle thing, paradoxically because it only occurs in absolution; rest is only our interpretation that allows us to live in a certain subjective truth.