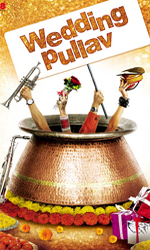 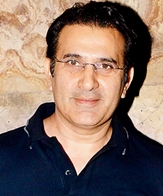 A love quadrangle based on "My Best Friend's Wedding" template, "Wedding Pullav" is a stale, over-cooked and spiceless tale, with predictable romance tropes from the very first frame to the last.

Motorbike designer Aditya Sodhi aka Aadi (Diganth Manchale) is all set to get engaged to Riya (Sonnalli Seygall), an industrialist's daughter, when he guiltily realises that his childhood friend, Anushka aka Lambu, is missing.

Lo and behold, Lambu announces her entry with the bang of the band!

As the friends reunite, we learn that Aadi's latest designer bike is to be launched by his prospective father-in-law and Lambu has a boyfriend Jay (Karan Grover), an artist who specialises in nudes, stowed away in London.

On the mention of Jay, Aadi's resentful antennae perk up, but he does nothing about it.

So together with their respective partners, they decide to marry at Aadi and Riya's pre-planned destination in Thailand.

So far un-convoluted but cliched, the entire coterie, family and friends land up at the wedding destination to cook the Wedding Pullav!

The only novelty in this overture is the fairly competent performances by Anushka Ranjan, Diganth Manchale and Karan Grover. While Anushka is confident, dimple faced Diganth with his well-chiselled physique is self-assured and charming. Karan Grover seems a bit lost among the lot and Sonnalli holds her stead competently.

Of the supporting cast, it is the young coterie Ali Khan as Batli, Neha Tomar as Niky and the character Peta who are worth a mention.

The rest of the senior actors, ham their way through.

Parmeet Sethi and Kitu Gidwani as Riya's parents; Kumarshaab and Amrita are perfunctory.

Rishi Kapoor as Mr. Lovinder Kapoor aka Luv Kapoor the ever-obliging, General Manager of the wedding destination is a big disappointment. He walks through his role dispassionately.

With verbose expositions, the undoing of this elaborate Wedding Pullav, is the fraught with "tell and show" scenes that are incorporated in the lazily drafted script. Evident among the few are, "Aadi aur Jay, ki bajegi band in Thailand" and "Itne saare balloons, solid drama haia"

Humour is forced and the dialogues are shallow, frivolous and lacks class.

The classification of the families too, seem grossly mismatched making the entire Pullav hackneyed and difficult to digest.

What happens when two best friends decide to get married to different people? Friendship gets confusing and love gets complicated at one mixed-up destination wedding! Watch the full trailer of 'Wedding Pullav', starring Anushka Ranjan, Diganth, Rishi Kapoor, Himani Shivpuri, and Parmeet Sethi.