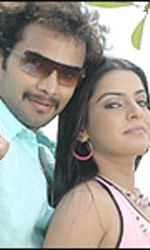 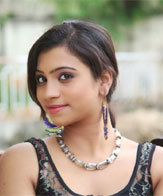 "Yagna" was publicized as an action-oriented horror film, but it ends up as a horror of horrors. This Kannada film is illogical and uninspiring and seems to have gone terribly wrong in every department.

Two things become apparently clear after seeing director Krishna Brahma`s "Yagna" - firstly a talented actor like Sree Murali, who had a great beginning with a film like "Chandra Chakori", seems to have perfected the art of choosing wrong subjects. And secondly, Krishna Brahma needs to brush up his narratorial skills.

"Yagna" lacks freshness and its narration is pedestrian. Producer Shankar has taken the storyline from actor Charmmee`s successful Telugu film "Manthra", which released just a year ago. Krishna has just made some cosmetic changes to present his own version of "Manthra".

Krishna Brahma repeats the same old stereotypes associated with almost every other horror flick - door locks being opened, curtains oscillating, antique objects shown in different angles - and nothing of these gimmicks take you to the edge of your seat.

And many sequences of the film are predictable. The film comes into life just before the climax, but the director has floundered in this as well.

The film is about Anji, a carefree youngster who works for a city-based don. Known to be a daredevil, Anji is sent to a haunted house by the don, who wants to usurp the property. Anji goes into the cursed house with his friends and is witness to the weird goings-on in the house.

In the meanwhile, Yagna, a music student,, comes to the house along with her friends on a project. But a murder in the house forces Anji and Yagna`s friends to leave the house.

As the story progresses, Yagna declares her love for Anji and wants to marry him. She also reveals that she is the legal heir of the disputed property.

But Anji goes ahead with his investigations into the murder and it is later revealed that he is actually a police officer.

Sree Murali may have to refuse projects like "Yagna" now onwards. He is good in action sequences, but his efforts are wasted because of the poor narrative. Debutant actress Priyanka indulges in a lot of skin show in the song sequences.

The so-called comedy by Om Prakash Rao and a galaxy of Telugu artists are in poor taste.

Krishna Brahma has also failed to bring the best out of the technicians. Music director Murali Krishna, who gave a few good tunes in his first film "Neene Neene", has fumbled in his compositions. Nothing special can be written about Niranjan Babu`s camera work either.

"Yagna" is an ordinary film. It may not be liked even by fans of the horror genre.