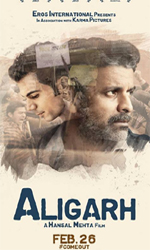 Director Hansal Mehta's "Aligarh" is a human rights story that reveals the plight of homosexuals in conservative Indian society. It is a tapestry of a compelling drama, enveloped between the two historical verdicts, the Delhi High Court first decriminalising and thenthe Supreme Court restoring criminalising Section 377 of the Indian Penal Code.

It is the true story of Dr. S.R. Siras, a professor of Marathi and the head of the Classical Modern Indian Languages Faculty at the famed Aligarh University, who was suspended on grounds of morality.

The film starts with the inciting moment when the professor's privacy is invaded by some miscreants who forcibly enter his house and film him sharing intimate moments with a rickshaw-puller.

What keeps you glued to the screen is the focused narrative and the natural performances, that give you a glimpse into the life of the protagonist.

Writers Ishani Banerjee and Apurva Israni have ensured that there is nothing unwarranted and no unnecessary titillation, given the sensitive subject. They have cleverly incorporated the track of Deepu Sebastian, a journalist from Delhi working for the Indian Post, to propel the narrative.

Manoj Bajpayee essays the role of the victimised, shy and unassuming professor to perfection, who is forced to fight his battle, singlehandedly. With his gait, speech and underplayed histrionics, Manoj is the character, you would believe in. The silences in his performance and vulnerability in his eyes, are used by him effectively to convey his anguish and loneliness.

The two Lata Mangeshkar songs, "Aap ki nazaron ne samjha pyaar ke kabil mujhe" and "Betaab dil ki tamanna yahi hai", woven dexterously into the script, encapsulate Dr. Siras' solitude and his desire to be loved. The way he passionately hums the song makes you reach out to him.

Rajkummar Rao as Deepu Sebastian, is lithe and natural. He plays the effervescent and enthusiastic Malayali journalist settled in Delhi with ease and the bond he forges with the professor seems genuine. Unfortunately, his character does not delve into why he gets attracted to the case and hence the track seems forced when he insists, "you have to fight it out, Mr. Siras".

The lip-lock between Deepu and Namita, his reporting head played by Delnaaz Irani, reveals the progressive India, thus, bringing out the sharp contrast of the orthodox Indian society, otherwise portrayed in the film.

Mounted with moderate production values, Satya Rai Nagpaul's camera work is steady and remarkable. His frames are realistic. With his wide angle lenses and tight close-ups, he artistically captures the claustrophobic space and the fine nuances of Manoj's haunting performance.

Karan Kulkarni's soulful background score is well-layered in the narration. There are a few edit jerks in Apurva Asrani's editing but this could probably be due to censor issues.

Aligarh is an upcoming Hindi movie based on the real life incident of Dr. Shrinivas Ramchandra Siras, who was suspended from his job because of his sexual-orientation. Siras, who was the professor of Marathi at the Aligarh Muslim University, later committed suicide. Manoj Bajpai is playing the role of Siras in this movie. Rajkummar Rao plays a journalist in the film. 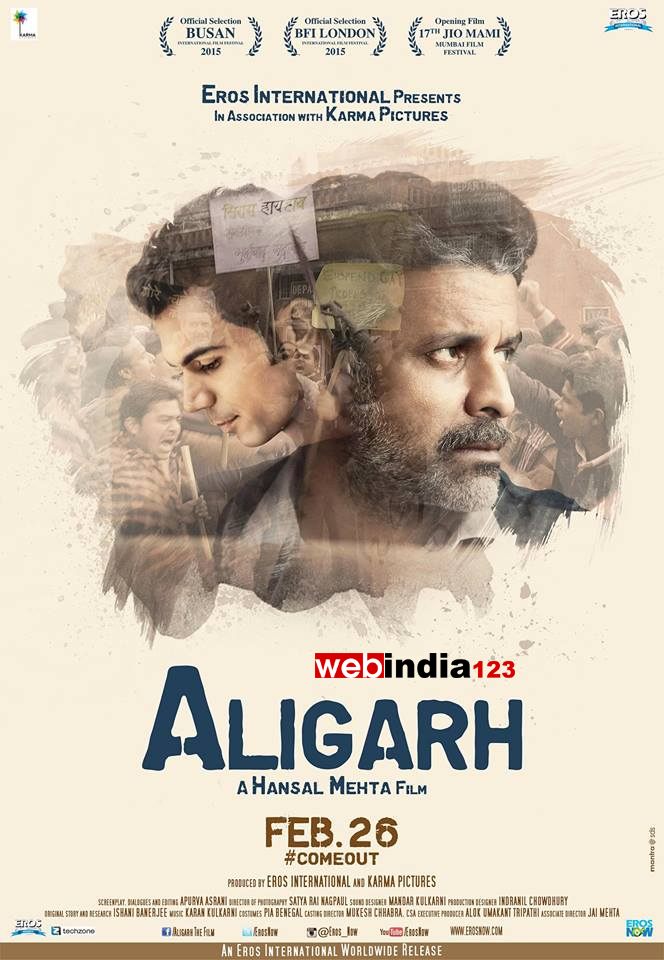 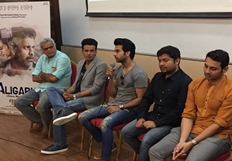