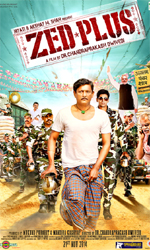 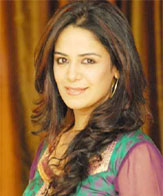 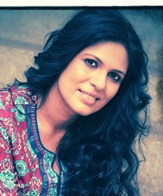 This Prime Minister cannot speak Hindi. No, he is not female and of Italian origin. Played by the very authentic Kulbhushan Kharbanda, Mr. Prime Minister in Chandraprakash Dwiwedi's heartwarming political satire, is a bearded, canny, suave and wily patriarch.

Like many films with political resonances, "Zed Plus" conceals to reveal. While we can immediately identify the politicians and their party-based manoeuvres, the script, nimbly knitted into a powerful parable by Dwiwedi and Ram Kumar Singh, pulls back just in time. So, no accusing fingers can be pointed at the characters for being too close to the cabinet.

Dwivedi's movie is a delightfully homespun take on the politics of communalism. The location is a dusty, closely-knit Muslim town in Rajasthan called Fatehpur, which gets an unlikely VVIP visitor in the English-speaking South Indian PMA, who wishes to visit a 'dargah'.

There is this wonderfully written sequence inside the 'dargah', where the custodian of the sacred place explains to the PM through his right-hand man (K.K. Raina, as capable as ever) what he, the PM, must do to please the god. Here, Adil Hussain plays against Kharbanda with a remarkable restraint.

Episodes such as these work because Dwivedi has cast male actors who blend into the film's freewheeling yet pertinent fabric without much ado.

I wish I could say the same about the female actors. There are some very important women in the plot who appear unconvincing because of the discursive tone in which they speak their lines and the make-up that they wear, and which has no business here. Feelings, in their case, are not about the spirit, but the faces.

Very often the effort to make pungent political statements outruns the need to tell a tightly-edited story. But then Adil doing a complete turn-around from his wry urbane part in "English Vinglish", tends to fill the fissures in the fearless frequently loose-limbed narration.

As the 'puncture-wallah' who suddenly finds himself at the vortex of a fierce political 'tamasha', Adil gets his character's personality and thoughts from the script to screen, losing none of the fervour and flavour of the character's reluctant heroism in the transition.

Even when at times the storytelling becomes less than engaging, Adil's Aslam remains watchable. Mukesh Tiwari as Adil's belligerent neighbour also contributes a pitch-perfect performance. Together, the two actors provide a delectable illustration of the Indo-Pak equation: warring and snapping at one another. But at the end of the day, bhai-bhai.

In the rarest of rare cases does a political satire make us laugh and weep so unconditionally. "Zed Plus" is that precious work of art where every actor and technician gets into the correct mood without caring about who's watching.

Tongue wedged firmly in cheek, Chandraprakash Dwivedi delivers a trenchant and ticklish comment on present-day politics where individuals get sucked into exploitative politics more by will than force.

The film's locational luminosity is unimpeachable. It is ensconced in the cinematography and art work. H.M. Ramachandran looks through the camera lens and sees not the dusty gallis of a Rajasthani hamlet, but the spirit of ownership that makes the characters occupy the ramshackle space with pride and dignity.

Muneesh Sappal's production design is not so much about design as intuition. These are visuals that come closest to describing the lives of Dwivedi's characters.

You may not agree with the cheeky politics of "Zed Plus". But you can't deny its integrity, warmth and humour.

The story is set in contemporary India in a small town of Rajasthan. A coalition Government, troubled by corruption and communalism, is on the verge of collapsing due to fights within the coalition partners. All the ministers are making efforts to save the Government, but still it appears that the Government will fall.

The Prime Minister visits the Peepal Wale Peer Ki Dargah and “Luck by Chance” he meets apuncturewala – Aslam. The highest authority of the country meets the lowest denominator of the society.

What follows is a unique story of a common man with Zed security. 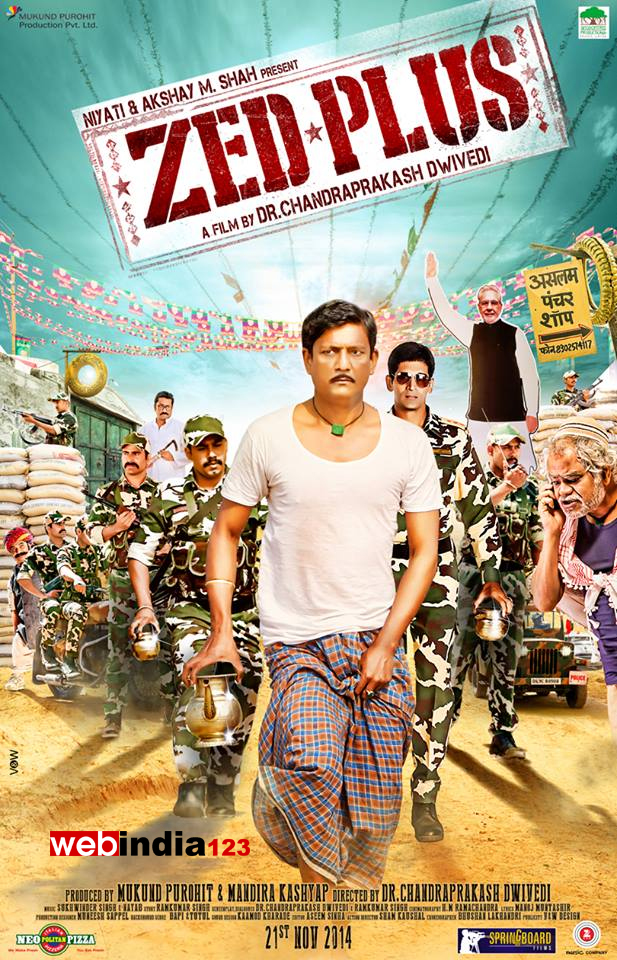 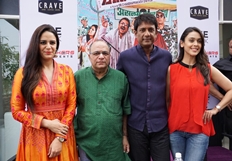 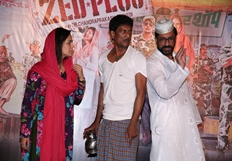