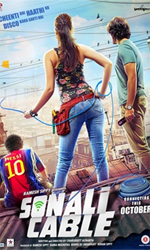 Half-way through this interesting film about cable connections and online predilections, the script audaciously bumps off the most endearing character.

And I thought that to be the end of the film's engaging quotient.

But no. "Sonali Cable" persists on grabbing your attention by its collar, pulling it along into a world of curiously convincing characters whom you may or may not bump into while traveling in the local trains of Mumbai. But they sure as hell look like real people....Except for the central character.

As the spunky neighbourhood cable operator who promises her customers that their cable connections would never go off-line, Rhea Chakrbaorty is much too sexy for the role. Her attempts to sound vernacular sound strained simply because you know this lovely girl belongs to the upper crust.

Sonali may seem fake. Her fight to keep her small-scale business alive is not. "Sonali Cable" is a reality-based drama about how the localized entrepreneurs are swallowed up by huge corporate houses. It's that classic battle between 'ghar ka khana' and 7-star cuisine. The homely 'tadka' that makes all the differences between customer care and entrepreneurial arrogance is at the core of this drama about the 'cheenti' that does a a defiant jig in front of the 'haathi'.

With undisguised energy, "Sonali Cable" lifts intrinsically mundane moments in the script to a level where we no longer feel the need to rationalize the potential absurdity of a situation where a petty female entrepreneur takes on a corporate magnate and emerges triumphant.

The characters are so confidently extended into the plot we are not allowed to feel the unbearable brightness of the high drama where the good little cable operator(show me a cable operation who looks like Rhea Chakraborty and I promise to get cable-connected for as long as there is Ekta Kapoor) beats the slimy tycoon (Anupam Kher), an uncouth magnate of business mergers who constantly boasts of drinking pegs worth Rs.1.5 lakh and keeps an ear-bud sticking out of his ear, probably to wax eloquently.

Admirably nearly every character in this crisp drama has an effective back-story. Every member of Sonali's cable crew comes across as an engaging individual. There is an interesting Bangladeshi hacker whose history emerges as the plot hurls towards a far-fetched climax.

So what if the script chooses to glorify the small-scale hero? The very fact that the female hero gets one more chance to dance around the grave of the typical heroine (RIP), is reason to rejoice about "Sonali Cable".

True, Rhea is unable to rise to the occasion as effectively as the rest of the cast. But she doesn't let the script down. Till the end the script treats her character sensitively. The father-daughter scenes work well because lyricist Swanand Kikire plays Sonali's father with unflinching credibility, and also because Sonali's father is neither the sodden debauch nor the squeaky-clean dad.

He makes a living selling vada-pao but he's gradually exposed to be something sinisterly else. Every character big or small exposes a hidden dimension to his or character. You either fall or rise in this film. No character remains unchanged.

This is not the first time when Ali Fazal plays a supporting role to his co-star. Fazal fills up his allotted space with little dollops of mischief and candour. His troubled relationship with his politician-mother (Smita Jaykar) in many ways defines the protest against the entrepreneurial elitism that the script takes on headlong.

The larger picture of a battle between the business of the heart and the business of corporotized ambitions is meshed into a humane drama. Every character breathes freely and believably into the script. While most of the performances are played out against a layer of tenability, newcomer Raghav Juyal stands out with his veneer of vivacity.

Watch out for Faizal Rasheed as Anupam Kher's over-qualified over-enthusiastic fixer.He's a gem of a discovery.

Ignore the malicious comments on the film. Go see "Sonali Cable". It is a very original and intelligent script, deftly edited and performed. Yes, debutant Charudutt Acharya is a better writer than a director. His characters are must have appeared far more interesting on paper. But then, cinema is not about the written word only. It's a lot more. 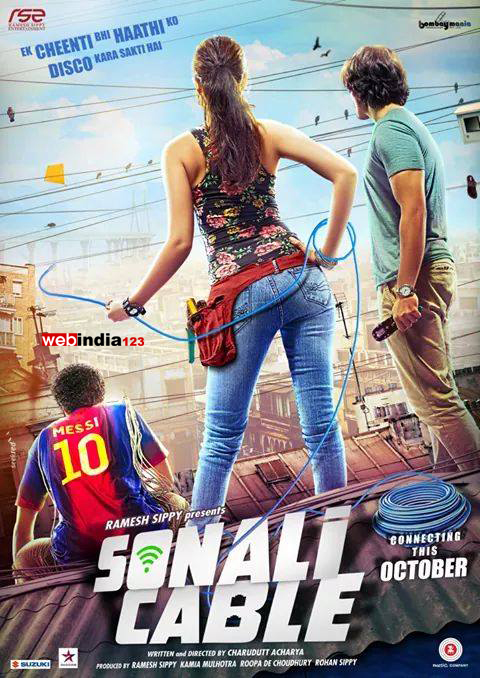