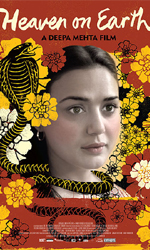 When the first slap comes, it hits the audience hard across the face.

Spousal abuse as a theme is not new to cinema. What sets Deepa Mehta`s "Heaven On Earth" apart from other films including Jagmohan Mundhra`s "Provoked" is the fusion of unspoken unexpressed terror with mythological elements all packed with sardine-like compactness into a small apartment in Ontario, Canada, where Chand arrives fearful and hopeful after her wedding.

What she brings with her is her mother`s tales and homilies, songs and mythology that follow the bride into her chamber of horrors.

What follows in Chand`s new life is a nightmare that could claim the life of any Indian bride transported into a foreign country after marriage.

Absolute authenticity is the hallmark of Deepa Mehta`s vision. Her permanent cinematographer Giles Nuttgens enters Chand`s adopted Canadian home with her and remains by her side, living her pain, experiencing her humiliation and agony, as within no time Chand becomes that nightmarish entity whom we all read about in crime sections of the papers: the abused wife.

The film`s greatest triumph is its economy of expression. The tightly-wound tale of the tormented wife is never allowed to have loose moments. Ironically, outwardly we see a warm home filled with a Sikh family half of whom seem to have absolutely nothing to do. Within their abject nullity lies the secret to the violence that claims, possesses and tries to smother Chand`s domestic dreams.

We know from the start that she`ll escape the nightmare of a brutal marriage. That she lives to tell her tale is self-evident. The magic of her existence in the trap of an arranged marriage lies in the illusion of normalcy and compassion that she creates within the ambience of abject terror by inventing a double for her husband... a doppelganger, a spirit in human form, if you will, who applies balm to all of Chand`s wounds and gives her the courage to survive when the very breath of her existence is being choked out.

The snake-god from Chand`s backyard in human form assuming the physical traits of her violent husband is a metaphor that illuminates the darkest recesses of Chand`s life. Every time she hides in her bedroom for a dialogue with her phantom-soul mate, Preity Zinta`s face lights up with thousands of unexpressed yearnings trapped in a heart that aches for release. Preity lights up the darkest corners of her tortured and frightened character`s heart.

Thoroughly deglamourised and devastated by destiny`s cruel blows, Preity plays Chand with dignity and depth that take us by surprise. She and director Deepa Mehta keep the hysteria completely in check. The drama is generated completely from the normal domesticated sounds and sights.

The film creates the growing claustrophobia of Chand`s marital domesticity with acute austerity. The spurts of on-screen violence are all the more shocking for the way they erupt within the workaday milieu.

The one big sequence of violence erupts in the kitchen when Chand`s somewhat confused and altogether out-of-control husband Rocky thrashes his wife... for his outwardly-stoic mother`s sake of course.

There are no villains in "Heaven On Earth" - not even the husband Rocky (played with understanding by newcomer Vansh Bhardwaj) who hits out at wounds that are never allowed to heal. There are only victims in Deepa`s scheme of presentation. Silently-screaming puppets on a string being manoeuvred into a life of domesticated dereliction by forces that we could designate as fate or just cruel blows of workaday drudgery.

The mythic intervention that creeps into the plot with the appearance of the naag in Chand`s backyard, slithers into the scenario with surreptitious grace, creating for the theme a residue of myth and dream that nourishes the wife`s bereft kingdom.

The borderline between illusion and reality, between Chand`s violent reality and the world of harmony and love she creates in the womb of her heart, is so superbly seamless we never know when Chand`s smothered scream transforms into a silent whoop of triumph.

"Heaven On Earth" is not a film that offers easily digestible solutions to the complex problem of domestic violence. It neither takes sides nor allows the bride to turn into a pitiable victim. Preity standing supremely dignified at the centre of the conflict furnishes the theme with amazing grace. She`s the only known face in the crowded Punjabi home of patriarchs, matriarchs, victims and perpetrators of bitter violence. But Preity never lets it known she`s a star.

She merges into the terrifying domesticity of Deepa`s household. The character steps out occasionally into the workaday world of a migrant job (the friendship with the feisty Jamaican woman at her workplace rings a little hollow when compared with the reality that envelopes the the rest of the plot) and returns to her horrific home space where she creates a mythical merger between illusion and reality.

Finally when Chand says goodbye to a life of married trauma, we see on Preity`s face a mixture of distant triumph and immediate self-realisation. She finally comes home.

When Chand (played by Bollywood superstar Preity Zinta) arrives in Brampton, Ontario to meet her new husband, she leaves behind a loving family and supportive community. Now, in a new country, she finds herself living in a modest suburban home with seven other people and two part-time tenants. Inside the home, she is at the mercy of her husband`s temper, and her mother-in-law`s controlling behaviour.

After a magic root fails to transform her husband into a kind and loving man, Chand takes refuge in a familiar Indian folk tale featuring a King Cobra.