EK - THE POWER OF ONE

Ek - The Power of One 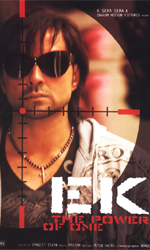 Ek - The Power of One Review

`Ek: The Power Of One` goes all wrong (IANS Film Review)

Everything that can go wrong in a film does in "Ek: The Power Of One".

Decades ago Raj Khosla had made "Bombai Ka Baboo" about a man who replaces the missing son of a simple rustic family and learns a few lessons on humanism.

Many years later Manmohan Desai reworked the same theme in "Roti" and in that Rajesh Khanna played the impostor son who takes over an impoverished son`s life.

Now in "Ek..." it`s the ceaselessly-stoic Bobby Deol who takes on the role of an impostor in a Chandigarh-based joint family who seem to specialise in making fools of themselves. The only members of this extended joint family to conduct themselves with dignity are Kulnhushan Kharbanda and Zarina Wahab.

What gives this high-velocity action flick a cutting edge is the fight sequences. Bobby seems to replicate his bade bhaiyya (elder brother) Sunny`s muscle power. When he hits, the earth moves.

Bobby`s character is shown to be a killer from adolescence. In the interestingly-conceived prelude, the child pulls a gun out on a gangster in a car and fires at him with the aim to kill.

Yes, this one learns young.

A subsequent attempt to just hurt a wily politician (Sachin Khedekar) goes horribly wrong - quite like this action-drama`s outdated script. And Bobby ends up hiding in the bustle of a boorish household in Punjab where he`s chased down by a trying-hard-to-be-cool-and-leery Nana Patekar.

There are some arresting moments between the fugitive and the cop. The material is occasionally edited with speedy care by Chirag Jain to bring together various strands of the action in a pantomime of cohesiveness.

Alas, the lose ends shriek out their protest. For Bobby, after "Bichoo" and "Badal", playing the cold-blooded assassin comes naturally. He could sleepwalk through such a role.

Nana is a live-wire but in the wrong character. The role of the randy cop shooting bullets and making lewd passes at the speed of a gun seems to be a corny carryover of Amitabh Bachchan`s Sexy Sam in "Kabhi Alvida Naa Kehna".

Nothing in "Ek..." suggests even a remote connection with sophistication. This one causes a `head-Ek`.