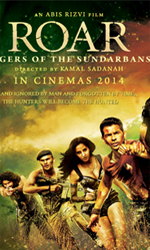 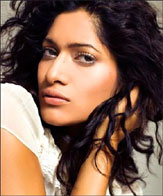 If you're looking for a rewarding cinematic experience with a coherent plot and well-rounded characters, then "Roar" may just prove a bore that you'd probably abhor.

But if you're the sort (like me) who grants leeway to movies for stretching its neck out beyond the domain of the conventional, then "Roar" has quite some visual swagger and splendour to it.

Consider this. It's shot entirely in the dense Sundarbens forest. Now the dilemma that debutant director Kamal Sadanah must have faced is...should he make a documentary about the tigers of Sunderbans (which would get no audience) or a fictional story set in the tiger sanctuary (which hopefully would attract an audience).

The narrative, underlined by an insistent background score (fortunately no songs), strains so hard for effect that you fear for its life-force. Moreover, the editing is abysmal. Scenes written to highlight the irreconcilable differences between Man and Nature meander to an incomplete full-stop.

Stunning shots of the natural beauty of the Sunderbans cannot compensate for the lack of consistency and logic in the plot about a bunch of adventurers's revenge on a white tiger, which finally lurches to a whimper rather than a roar. The characters are all written for the sake of creating a shock effect as one by one, the plot's populace pops off the face of majestic map.

Time after time, the editing exposes the lack of coherence in the plot. Characters jump into the danger zone and then wait for the script to decide their future. The film was obviously written as the shooting progressed, thereby providing a rationale for the vast expanse of incidents that are crammed into this jungle-adventure story.

The killings in the sinister marshland are well-staged. In fact, the film's cinematography by Michael Watson is so brilliant that it makes you want to shove the characters and their inane prattle out of the way to just savour the magnificence of Sunderbans. Like I said, Kamal Sadanah wanted to tell a fictional story. Wish he had saved the fiction for another day, another location.

The acting is uniformly amateurish with the two female actors Himarsha and Nora Fatehi joining together to create a wildlife cleavage club. They look and speak out of place in the jungles. Attempts to add glamour to the grisly goings-on are downright clumsy. You can almost smell the director's unease and awkwardness in trying to infuse acceptable commercial trappings into the sun-kissed rugged picturesque locales.

One tiger in Ang Lee's "Life Of Pi" signified a comment on the entire relationship between Man and the animal kingdom. Here in "Roar", there are several tigers, plus repeated invocation of snakes and other wild crawly creepy creatures that jump out of nowhere to create more shock than the 'shauq' value that the film purports to validate.

What we get to know finally from this film about the relationship between Man and Nature is, it is one helluva screwed-up alliance.

This could have a brutal avatar of "Born Free". If only it didn't conceal the exuberant computer-graphics in streams of tribal folklore dressed up in swanky clothes. Images from the National Geographic meet "Fear Factor" in this brilliantly photographed adventure saga.

You may not think much of the characters's shallow shindings during the time of exceptional stress. But one thing is for sure. You've never seen anything like this in Hindi cinema. And I don't necessarily mean that in a positive way.

The film claims to have not hurt any animals. But what about the poor audience? There ought to be a parallel SPCA -- Society For The Prevention Of Cruelty To Audience.

Uday, a young photojournalist on assignment in the jungles of the Sundarbans, rescues a white tiger cub ensnared in a poacher’s trap and brings the cub to a small settlement he is based in. Soon, panic among the villagers sets in. In order to bring calm back to the villagers, the forest warden takes the cub away.

The Royal Bengal Tigress enters the village in the night searching for her cub. She picks up the scent of her cub’s blood and reaches the photographer’s hut. When she fails to get her cub back, her instinct leads her to avenge the kidnapping. She unleashes her wrath upon Uday, kills him, and disappears with his body.

Enters Pundit; captain of an elite commando team, who comes to the Sundarbans to claim his brother Uday’s body. Silent replies from the villagers leads Pundit to a confrontation with the park warden. She callously declares the case closed and refuses to send a party to recover Uday’s body as the expanse and dangers of the forest ecology are too complex. Angry and emotional, Pundit decides to deal with the matter himself. He calls upon his own crack commando team and with the help of a local guide Madhu they engage a known tracker, Jhumpa, and set off on a do-or-die mission to capture and kill the white tigress.

The team's quest leads them deep into the marshy heartland of the Sundarbans where they see things only heard of before in old folklore.

Yet sharp and intelligent, the white tigress not only eludes them every time but also manipulates them into her territory. Adding to their predicament, a villainous poacher Bheera senses an opportunity to serve his own interest. He schemes a plan to use the survivors as bait to trap his prize catch, the Royal Bengal White Tigress. But little do they know that the hunters are soon going to become the hunted.