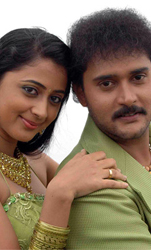 Its crystal clear that director S. Govind`s Raaj Kumari is a remake of Tamil film Ananda Poongaatre that starred Ajit, Meena and Karthick, even though the producers haven`t said so in clear terms.

But Govind has remained faithful to the original without trying to reinvent the film to suit the contemporary society. The result is that Raj Kumari turns out to be an insipid venture that will bore you right from the beginning.

Some of the sequences are highly regressive like when a woman is asked by the village head to marry the man who raped her. There are several instances like this where the dignity of a woman is lowered unnecessarily.

And some of the dialogues in the film are so cheap that you are made to wonder whether the audiences will digest such crudity.

Govind and the film`s hero Balaji desperately need a hit, but even the presence of Ravichandran in a special role does not save this film. Balaji`s last two films were non-starters at the box office, but this new one is perhaps the worst of the lot.

Govind made a decent beginning in Jhoot, but his poor handling of an already weak script has completely let down his latest venture.

The movie is about Kumari, who comes to the city with her music teacher`s child and stays in a rented accommodation. She pretends to be a widow, but Raaj, who lives in the same colony, takes a liking for Kumari. However, it ends up as a one-sided love affair.

She encounters a tragedy on her engagement day as her music teacher is killed because of a mistake committed by the village head. An angry Kumari then takes her teacher`s and heads to the city and meets Raaj, who is ironically the same guy she was supposed to get engaged to.

In the end, however, Raaj and Kumari get united.

Balaji has tried to be effective in his role that has different shades to it. He is better in the emotional sequences. Tamil actress Kanniha has a major role, though it is Nikitha who features prominently in the film`s publicity. Nikitha looks like a glam doll and has only a few sequences and a sizzling number.

Kanniha does justice to her role. Ravichandran plays the music teacher, but he has more sequences flexing his muscles with villains.

Nothing special can be written about Srinivasa Murthy, Thulasi, Rangayana Raghu, Bullet Prakash and Sundar Raj, who just add to the cast. Joshi`s camera work is just above average and Hari Krishna`s music isn`t great either, except for the title song.

The dragging first half and the meaningless second half of Raaj Kumari make the film quite a tedious watch.