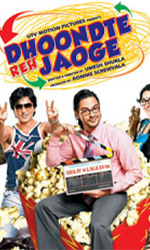 Johnny Lever playing a hardcore Pakistan-loving Muslim screenwriter in Bollywood, sitting on a rooftoop amidst a flurry of green flags and narrating a script that is a sad mishmash of past blockbusters could have been hilarious. However, he was part of a film that attempts to evoke mirth from the whims of the working-class but ends up weak-kneed and washed-out with the effort.

The characters in this quirky, quick-mix comedy try to give you the formula for a flop film. Finally, the characters end up making a hit film. If only the people behind Dhoondte Reh Jaoge were that lucky.

It seems they set out to make a hit film by conceiving a plot about a totally zonked-out film unit that has set out to make a flop film. But the idea never quite gets beyond the wish list. The collection of characters who crowd the film`s corny canvas seem to stand uncertainly at the threshold of a spectacular satire that never takes off.

The cast seems to be in the mood for masti. And when you have the redoubtable Paresh Rawal helming the hilarity, what could go wrong?

In theory, nothing. In practice, everything goes wrong in the comic climate of this strange connivance about an out-of-luck producer (Paresh), an out-of-luck charterered accountant (Kunal Khemu) and a struggling actress (Soha Ali Khan).

And if this trio reminds you of Rishi Kapoor, Farhan Akhtar and Konkona Sen Sharma in Zoya Akhtar`s recent Luck By Chance, then blame the Bollywood setting and banish the thought.

No effort is made to understand the workings of the industry with satirical sensitivity. The laughter is the main criteria for entering the dream world of movie making. Sadly, the laughs are few and far in-between. The Sholay and Lagaan spoofs give the humour an extremely wannabe appearance.

Unintentionally bits and pieces of the satire merge into portions of Rangeela (wannabe actress falls in love with screen hero while her lover-boy from the chawls seethes in anger) which in turn merge into an Aziz Mirza kind of scooter-riding dreamers` part for Kunal.

At the end of the comedy, the Paresh-Kunal intended flop turns into a superhit while the duo lands up in jail.

No such luck with this rather droopy and sad comedy. It tries hard to be funny and original but ends up being neither here nor `dare`.

Among the performers, Paresh needs no recommendation. In fact, he says as much in an end-title joke. Kunal reveals some hidden comic talent. Sonu as a somewhat dimwitted matinee idol does a number of get-ups and avatars quite sincerely. Sorry, he isn`t supported by anything much in the plot.

‘The concept is simple, brilliant, failsafe, unique and guaranteed to work,’ says Anand Pawar (Kunal Kemmu) an honest Charted Accountant but looser in life, to Raj Chopra (Paresh Rawal), a veteran film Producer with no money. All they need to do is raise 100 Crore from various financers and produce the film in 5 Crore. They would then make a film that will never work, a film that will be hooted out on the first day itself and run away with 95 Crore.

They want to become instant millionaires in the shortest time possible.

An infallible plan. To make a FLOPBUSTER they rope in Super star Aryan Kapoor ( Sonu Sood) as a the lead in the film, they also rope in Parvez Asharraf (Johny Lever) as a writer, who is Pro Pakistan and many other weird and wacky actors, director, music directors for the film.

Anand Pawar becomes so greedy that he decides to cheat on his own girl friend Neha Chattopadhayay ( Soha Ali Khan) who is a small time theatre actress. Anand cast her as a main heroine in the film so her acting ka keeda will be over in one film.

This not only becomes one of the most masterful of escapade (fun with a lot of escapes) but also instigates a laugh –a – thon.