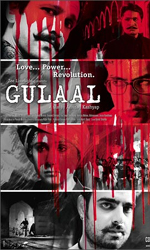 The blossoming of Anurag Kashyap into a formidable storyteller who bends all rules of filmmaking acquires a startling new definition with Gulaal, which is about student unrest and intense politicking.

Gulaal emblazons itself across the screen as a deft and brutal film on the culture of decadence in a typical north Indian setting. And it spares no room for niceties as it is a powerful portrait of a culture that thrives on bullying tactics.

The homage to the cinema of Vishal Bhardwaj is rampant in Gulaal. Somewhere in the brilliantly-cohesive soundtrack we even hear strains of Lata Mangeshkar`s Pani pani re from Bhardwaj`s Maachis in the film where life is lived by the gun and the mantra for survival is deception.

The world of Gulaal is crowded, claustrophobic and potent. The writer-director spares us none of the details in bringing to life a world where unlicensed guns and unchecked lawlessness rule. This is the kingdom of anarchy. Enter at your own risk.

In many ways Kashyap`s portrait of a world on the skids is borrowed from the mafia films of Martin Scorcese. The same disregard for human life defines Kashyap`s collage of queerly egocentric characters in Gulaal.

In Gulaal human lives get snuffed out with anarchic disdain. The location and mood are perfectly pitched to deliver an ambience of uncouth vigilanteism. Men who are mean because it`s their only trick of self-preservation and women who scheme against unsuspecting men by using their sexuality tumble out of the crowded canvas.

Kashyap`s narrative provides us with no fullstops. The editing by Aarti Bajaj is so relentless in its pursuit of variable moods and situations that the audience is often left behind in efforts to keep track of the goings-on. The soundtrack too perpetually races ahead of the visuals.

Shakespeare meets Quentin Tarantino in Gulaal. With Dev D and now Gulaal, Kashyap has proved himself a master of basic storytelling. He pulls the plug on cinematic pleasantries and takes us straight to the core of the characters, often rotting and evil.

The royal politics of separatism rubs shoulders with the politics of sex and power in a heady brew that the Shakespearean tragedies had patented a century ago. And yet Kashyap`s stimulating cinematic language embraces its literary antecedents without losing focus on ugly facets of contemporary Indian life.

Kashyap begins with college ragging when we are introduced to the callow hero Dilip Singh (Raj Singh Choudhary) who`s locked up by a bunch of bullies with a naked woman(Jesse Randhawa). The two strike an empathetic cord that takes them on a nightmarish journey through the scummy world of north Indian politics where brother kills brother and love gladly betrays love.

Gulaal is many things at the same time. As a portrait of small town politics it bludgeons you with its lethal mix of grimy morals, slimy characters and perverted politics. The stench of corruption is conveyed with the same intensity as the odour of sweaty bodies running through dirty gullies in pursuit of the next victim.

At heart Gulaal is a portrait of a civilisation that`s rapidly receding into chaos but thinks it`s just karma that propels them into annihilation. At the core there`s an unspoilt uncorrupted relationship in Gulaal - that between the aggressive student leader Ranajay Singh (Abhimanyu Singh) and his protege Dilip.

It`s no coincidence that Dilip tells his soulmate Anuja that he feels vulnerable without Ranajay.

Beneath the politics of power and sex, Gulaal hides a tender longing for bonds that transcend the barrel of the gun.

Gulaal sees an authentic set of actors playing characters who are completely at one with the director`s dark vision. Outstanding in different ways are Abhimanyu Singh as the self-disinherited royalty, Pankaj Jha as the over-age college bully, Kay Kay Menon as the unscrupulous Rajput leader and Aditya Shivastava as the illegitimate heir of a subverted princedom who dotes on his kid sister (Ayesha Mohan).

And then there is Piyush Mishra as narrator, conscience and cynic. In fact Mishra plays many roles and defines the chaos of the plot with songs that sing of old forgotten values in new power-packed parodies.

Gulaal, which has Kay Kay Menon in the lead role, took shape in 2001 but was delayed due to myriad reasons. The film, which is dedicated to all poets with a vision for India, is finally set to hit the theatres Friday (March 13,2009).

Set in Rajpur, a fictional city in Rajasthan, the film revolves around a member of the erstwhile royal family who wants to go back to the days of royalty and become the ruler of the state.

The movie is based on politics and as usual is very hard-hitting. `Gulaal` is very easily going to be one of my best movies, Kashyap told IANS.

The story is about about a student Dileep (Raja Choudhary) who comes to Jaipur to study, accompanied by his servant Bhanwar (Mukesh Bhatt).

Against the backdrop of a local political conspiracy, the film begins with a Rajput conglomerate gaining strength as an erstwhile royal Dukey Bana (Kay Kay Menon) and a few other ex-royals convince a reluctant Ransa (Abhimanyu Singh) to contest for college elections on behalf of the Rajputana party.

The main fight is then between Ransa and Kiran (Ayesha Mohan) for the general secretary`s post.

The rivalry between the two groups intensifies and eventually leads to Ransa being killed by Kiran`s brother. Dileep is then asked to contest the election by the Rajputana party.

Gulaal races to its climax where a face is revealed - the face of the new leader.