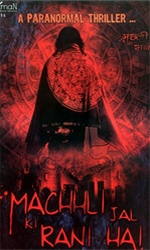 The horror genre in Bollywood suffers because of its inability to reinvent itself over the years.

Linda Blair played the girl possessed in William Friedkin's "The Exorcist". Forty years later the very talented Swara Bhaskar gives the devilish avatar a try. She works hard on getting the twisted and contorted face and body language right. But Swara, bless her possessed soul, is let down by a tacky script and the director's inability to take the spooky genre where it hasn't been before.

It's all familiar, and not done in any way that can be considered even reasonably original. The supernatural murders attempt to be so gruesome that they end up being unintentionally funny.

A maid (more made-up than her 'maalkin') is pierced in her eyes with a hanging on the wall.

Later the hanging reappears on the wall, the blood and gore all washed away.

Admittedly "Machhli Jal Ki Rani Hai" has some genuinely scary moments. There is a sequence where his wife serving him fish for dinner surprises Swara's screen-spouse.

Until his eyes fall on the fish tank and he sees their pet fish missing from the tank...

Then towards the end there is a twist in the tale, which is bound to send a chill up your spine, regardless of whether you believe in ghosts or not.

The payoff comes too infrequently, and too late.

Most of the plot is covered in what appears to be an occasion to give idle housewives and aspiring actors a chance to play out their acting fantasies.

The dialogues are delivered in unnecessarily loud voices and the sequences pile up one on top of the other without creating any coherent scheme of storytelling. The narrative follows the weather-beaten track of raising scares through shadows and sound effects.

These are punctuated by bouts of.... err, comic relief that leave you hankering for relief from the comic relief.

As stated earlier the last half-hour when the ghosts go amok as well as the preamble when the exorcist (Deepraj Rana) chases the devil across a dangerous terrain is mildly engaging.

If you enjoy watching films about ghostly possessions in normal households then "Machhli Jal Ki..." might of some interest to you.

But the horror genre in Bollywood needs a revamp.

Machhli Jal Ki Rani Hai is a horror film with an intriguing story-line, racy songs and heart-gripping VFX that will give horror an extra edge.

Its not just a matter of one spirit... Its a matter of multiple possessions in one body..Fear is the key..

It’s a story of a joyful couple living in Mumbai with their 4 year-old-son. Later the hero (Bhanu Uday) gets transferred from Mumbai office to groom and revive their factory in Jabalpur. The family shifts to Jabalpur and resides in the company guesthouse,on the outskirts of the city. As time passes by, an unusual ride starts in the guesthouse which only the heroine (Swara Bhaskar) can feel & experience.

Will she be able to find out who is there in this house? Is her family safe is this house? What happens when one day she actually gets possessed by spirit/s?