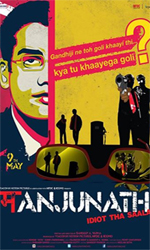 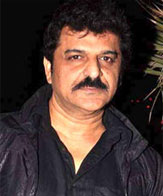 The bereavement of parents has been done to death in our cinema. And I do see a cruel pun in that. From Om Puri and Revathi mourning so gracefully for their martyred son in "Dhoop" to Farouque Sheikh and Sarika grieving far more openly in "Club 60", the stretch of sorrow for the era of lost parenting has been long and productive.

In "Manjunath", the story of the honest-to-goodness Indian Oil executive Manjunath Shanmugam who was murdered for questioning the oil mafia in Uttar Pradesh, director Sandeep Varma has opted for a dry-eyed, docu-drama freewheeling style of narrative.

We see the protagonist, played by newcomer Sasho Satish Saarthy, talk directly into the camera and to the man who murders him. His angst and his battle with corruption are often voiced in the Indie-rock sounds of the Parikrama band.

These distancing devices in the narrative deliver a dryness to the tone of the storytelling and the texture of the characters.

The murder of Manjunath is a national tragedy of epic proportions. This is not an epic film. It tells Manjunath's story in a direct, documentary dry-eyed style that goes well with the sardonic resignation and the prevalent cynicism with which we look at the death of innocence and idealism in modern times.

The film takes minute interest in the incidents and characters from Manjunath's life. This results in a kind of over-elaborate case-study where the characters appear more interesting for what they represent than what they are actually seen doing on screen. The film's restricted budget is also evident in the film's overall look.

These considerations make little difference to the film's larger picture. The disturbing message of the film, that being honest is a threat not only to the world at large but also to the individual who suffers this malady, runs through the narrative. Seen in the context of a stubborn idealist battling corruption Manjunath makes you forget Athe lack of moistness in the narrative.

There really is no room for tears in a world where corruption is a way of life. Manjunath's straightforward allegiance to the truth is a direct descendant of Dharmendra's character in Hrishikesh Mukherjee's "Satyakam". Not much has changed since that film showed how much one has to suffer for one's idealism.

In "Satyakam", Satyaprakash was killed by cancer. In "Manjunath", it is the cancer of corruption that kills our hero.

Prudently the film casts an absolute newcomer Sasho in the title role. What we see on screen is Manjunath and not an actor playing the part.

Wisely the film selects a strong supporting cast - Seema Biswas as Manjunath's mother is as usual, outstanding. Ditto Divya Dutta and Yashpal Sharma. Do these actors ever deliver sub-standard performances?
Once a while there comes along a man who genuinely wants to change the world we live in. "Manjunath" is the hard hitting conscientious story of one one braveheart who tried to make a difference. And paid with his life. Manjunath's valorous story had to be told. The director pieces together Manjunath's story like Orson Welles' "Citizen Kane".

As every piece of the jigsaw falls into place you want to salute the unsung hero.

Thank god for Manjunath, who is not a man but a metaphor for that rapidly evaporating cult of idealism that we thought died with Hrishikesh Mukherjee.

Set in India’s hinterland, the film follows young Manjunath Shanmugham’s journey as he passes out of the elite IIM Lucknow and joins an oil company.
One day Manjunath goes missing.

When found, Manjunath appears very frantic. Both he and his friends had realized that there is large scale adulteration of fuel taking place. It is so big that no one says anything. But Manjunath has realized that the fuel is getting adulterated with kerosene, which is sold cheaper for the ‘poorest of poor’.

This unnerves him. He has had an elite education, and that ‘if he does not do something, then who will?’.

In a dramatic sequence of events, he gets several threats to his life,yet decides to do the right thing. Surely enough, he is shot dead on duty. There seems no hope, then suddenly unrelated people combine to take the fight to the mafia, and get him justice.

Part of the unique treatment are defining conversations between the dead Manjunath and his killer.

The film uses the real story as a metaphor for larger questions. 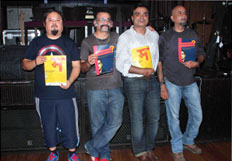