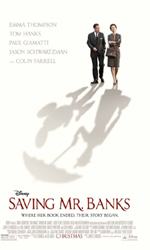 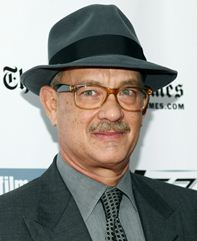 The film is a very intimate representation that unravels the source, adaptation and making of the legendary classic, "Mary Poppins". Touted to be a "real story" of Walter Disney's travails in the making of the film, it also encapsulates the life of the author, P.L. Travers along with dollops of Disney magic.

The screenplay by Kelly Marcel and Sue Smith seamlessly stitches a layered narrative, one in the present period, which happens to be 1961, where it exhibits the conflict between Travers and Walter Disney and the other in 1906 that explores Travers' childhood in Australia; her relationship with her alcoholic father, Travers Goff, her mother's attempted suicide and the arrival of her aunt, her hope for a better tomorrow.

What starts off as a light-hearted, somewhat prickly comedy about a cranky novelist slowly becomes something more sentimental, eloquent and meaningful.

The film opens to author P.L Travers caught in a quandary over financial issues in London. Her agent tries hard to find her a good patron who would give her a substantial royalty. But unfortunately, she is pretty finicky about transferring her rights of the book. So in a stalemate situation, her agent cajoles her to travel to LA to negotiate with Mr. Walter Disney directly, who for the past 20 years has been trying hard to adapt the book for the film.

While the first half of the film delves in building the personality of Travers intermingled with her memories as a child. The second half throws you into the battle royale, where Disney musters all his charm and enthusiasm in the hope that Travers may concede to the idea of letting go her book for a film version.

But Travers remains inflexible and continues to clash with the team working on developing the script. Thwarted at every turn, it looks as though "Mary Poppins" will never be made. But thanks to Mr. Disney's perseverance, he manages to strum the right chord with Travers.

Though viewers are aware about the conclusion of the film, it is the journey that is remarkable. The film works purely and simply on all fronts. The acting, script and visuals are all fascinating.

With twice Academy winners, Tom Hanks and Emma Thompson, "Saving Mr. Banks" is a viewer's delight. Thompson takes Travers from being an amusing with irrational impossibility, to an emotional human we can all sympathize with. She mesmerizes you with her outstanding performance, in fact even outshines Hanks on several occasions. She is ably supported by Annie Rose Buckley as the young P.L.Travers, who was fondly nicknamed Ginty by her dad played by Colin Farrell. Farrell creates the perfect balance, where you sympathize, as well as loath him for being a fantasist addicted to the bottle.

The visuals may seem deceptively simple on the surface, but juxtaposing the images of 1906 with 1961 is an art by itself. The efforts of Production Designer Michael Corenblith, cinematographer John Schwartzman and costume designer Daniel Orlandi are blatantly evident in the film with: The golden hued images of rural Australia, Travers' London Home, The Airport scenes in 1961 along with sequences in Burbank and Disneyland.

This film is Director John Hancock's best film. He has taken pains to show how hard it was to make "Mary Poppins". And with all its brilliance and complexities, the film has a feel-good factor that remains etched in your memory, long after you leave the theater.