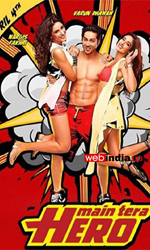 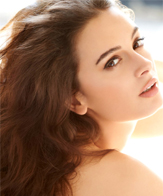 It's not easy being David Dhawan. Over the last 20 years he has constantly kept the laughter alive. Having generated barrels of mirth with Govinda and Salman Khan in the past, now it is time for David's son to have a blast. Playing Seenu, the no-good wastrel who cons his way through a series of outrageous escapades, Varun Dhawan is to be seen monkeying around in every frame.

To his credit, the Dhawan scion carries off the incessant demand on his performing skills. Varun is a like a Govinda on steroids. He pumps up the energy level to the extent that even his two discernibly dheeli-dhaali heroines end up looking they are having fun. It could be just an act. We will never know. Every character is in the wink-wink mode.

Cleverly David Dhawan builds on Varun's contagious gusto. Scene after scene gives the star-kid a chance to flex his muscles and demonstrate his skills at holding a frame up with gravity-defying laughter.

"Main Tera Hero" is the kind of loopy, askew-me plot that makes no claims to any intellectual gratification. Its naked, unassuming goofiness is its greatest USP. And who goofier than Varun Dhawan who starts off as a student in a college where the campus beauty Ileana d'Cruz is an untouchable. The neighbourhood goon-like cop, played by Arunoday Singh, has put a proprietorial seal on her. To be honest Arunoday has the most difficult part in this any-goes comedy of hell-raising errors. He is shown to be a goon in khaki with serious anger-management issues.

One of the film's funniest sequences shows him bashing in his anger-management therapist, Ashwin Mushran's face. I don't think this sequence could have been part of the original Telugu film ("Kandireega"). Writer Tushar Hiranandani updates the original material, giving the plot and the individual scenes a sense of renewed animation and vigour.

The film is adroitly shot and edited. Like the leading man's six-pack abdomen, there is no flabbiness in the storytelling. The characters do the stupidest things with a brisk bravado.

Although the plot is skimpier than the two heroines's costumes put together, it derives terrific energy and sustenance from its leading man's zest for life. The writing vacillates vibrantly between the perky and the puerile. What saves the day is the narrative's gumption. David Dhawan doesn't fear falling over as he hurls through an abyss of absurdity.

The film is low on aspirations and high on hi-jinks. Moving from Mumbai to Bangkok, the plot is bolstered by a blizzard of low-brow episodes. Even the song and dances are engaging knick-knacks, more memorable for being forgettable than anything else.

As a showcase for Varun Dhawan's skills, "Main Tera Hero" is a cleverly designed blues-chaser. Surprisingly there is room for other actors to make an impact. Besides Arunoday who is happily stupid in his mushy-bully's role, Anupam Kher and Saurabh Shukla as a gangster and his right-hand man kick up a storm.

But what's with the Dhawan's bimbette treatment for his leading ladies? If Karisma Kapoor and Pooja Batra had nothing better to do than run around Govinda and Sanjay Dutt in Dhawan's "Haseena Maan Jayegi", in "Main Tera Hero", Ileana and Nargis pant after Varun and Varun and Varun, and then some some Varun.

You get the picture? One of the songs commands "Palat! Tera dhyaan kidhar hai?" "Hamara dhyaan bilkul idhar hai, Dhawan Saab. Bright, bouncy and colourful, the mad mad world of David Dhawan's 20-year old smile-a-while scheme gets a renewed laugh-line in "Main Tera Hero". While Varun Dhawan goes about the task of filling up the screen with his confident zest, David Dhawan ensures there is enough fuel to furnish the funnies with a furious tempo. 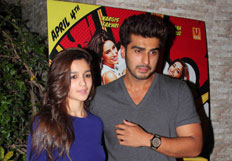 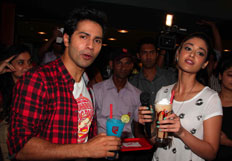 Varun and Ileana promotes their film at cafe and theatres 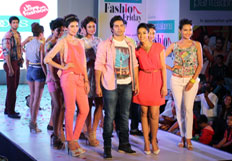 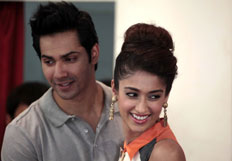