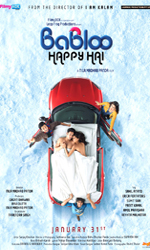 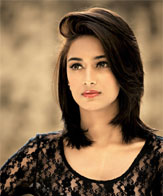 
First, a question for the director: Why on earth has he given such a moronic robotic title to a film that informs, entertains and engages our attention? In short "Babloo Happy Hai" does everything cinema is meant to. And it does so with a transparency and sincerity that leave us...well, not quite enchanted, but decidedly involved with the lives of characters who seem to drift in and out of a haze of self-indulgence until their lives come to a stuttering halt.

There is a soulful fluidity to the narration even when the characters seem to be moving aimlessly through a series of misadventures designed to make them look prettier from outside than they actually are inside.

The "hero" is one of those spiritually frozen guys who lets himself be trapped in the wrong relationship for money and security.

But does Jatin care! He is one of slackers who would probably like to die in an Armani suit.

Enter the free-spirited Natasha(the dusky and expressive Erica Fernandes). Jatin and Natasha share a one-night stand at a bachelor's party on the eve of his wedding.

You know exactly where this story is heading. Hint: in the direction opposite to the aimless alliance between Jatin and his overbearing fiancee Tamanna. But suddenly, out of the blue, the narration changes into a somber hue. We are led gently, as it were, by director Nila Madhab Panda into the world of HIV AIDS.

The second movement of the plot brings out a statement on the need for self-control for the "now" generation and the even more urgent need for compassion towards people suffering from the HIV virus. Where the film could have become unbearably preachy and sanctimonious director Panda opts for a light, though never frivolous tone.

The characters are connectible in a very Delhi noveau-riche way. The film is good-looking without sanitizing the underlying message. Panda looks at these soul-less characters with indulgent humour.

Never judgemental, but not quite forgiving either, the mood of narration constantly swerves from tongue-in-cheek to borderline tragic.

This is a film rich in texture and tonality. While it misses out on getting to a place of real greatness, it does display a substantial amount of harnessed energy in putting across the characters who are fatally flawed and fiercely pitiable in their pursuit of good times.

"Babloo Happy Hai" is fresh, breezy, naughty, nifty.It gives out a strong message without being weighed down by the social statement.

The film is neatly edited by Biren Jyoti Mohanty with the characters sometimes cut short in their self-indulgent activities and distracted babble merely because what they are doing ceases to be interesting beyond a point. The film's Manali snowscape and Delhi traffic are captured by cinematographer Subhransu Das with austere gloss.

While the film does want to look pretty it never gets carried away by a cosmetic conceit. The performances have a well-worked out "workshopped" quality. While some of the supporting is interesting, the real find of the film is Erica Fernandes who as the fey and feisty Natasha comes to grips with her character's doddering inner-world. And never mind the cop-out at the end when her audacious one-night-stand is turned on its head.

It isn't easy to put across a message on AIDS without making the film look like government-sponsored propaganda. Easy does it in "Babloo Happy Hai". It wears its social message on the perils of unguarded intimacy lightly. It is thought-provoking but not preachy, emphatic but not screechy. It makes a whole lot of sense in that disarmingly artless style we saw in the director's "I Am Kalam".

Babloo has his hands full with beauty, cutie and duty!
A fun film by awarded director of `I AM KALAM` releasing on 31st January 2014.

`Babloo Happy Hai` is a film that embraces these words, as it takes you on a journey through the breathtaking mountains, and through the lives of a set of memorable characters who will make you think again about love, and fall in love with love itself.

It is a story set in the fast-paced times we live in today, concerning those who are forced to move the fastest - our youth.

Amidst the common notions of irreverence and rebellion, the youth of today is troubled by many questions, puzzled by many choices, battling with a lot of pressures; wandering perhaps, but not entirely lost. The most basic of these conflicts, however, remains the question of love.