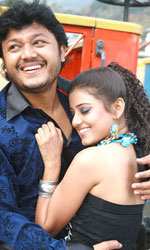 Dayal Padmanabhan`s Circus has a tag line - See and enjoy the film. The producer-director, who also plays a significant role in the film, has tried every trick to entertain the audience and he has succeeded to a certain extent.

Circus is a different film for its lead actor Ganesh who has, so far, done romatic films only. His character has many shades and the actor has done justice to it with his performance.

The main strength of the film is the edge of the seat thriller scenes. And the last 30 minutes of the climax are really engrossing. Technically Circus is a top class movie, but its music is not so impressive.

In his eagerness to please Ganesh`s young fans, Dayal has incorporated the romance element in the movie but it fails to gel with the main plot. The film could have been better without the love angle.

Circus revolves around the foolish and risky adventures of five friends headed by prankster Dhanush (Ganesh). The fun loving boys live in a railway colony and the railway station is their regular meeting point.

Dhanush`s childhood friend Priya (Archana) is in love with him, but he is not interested in her.

Three of Ganesh`s friends try to play a trick to mar the reputation of a train that runs between Bangalore and Mysore. But it leads to a dangerous situation and they do not know how to come out of the problem. By using his intelligence and courage, Ganesh bails out his friends from the tricky situation. In the process, he also finds that a terrorist group hatched a plan to place an explosive on another train.

Ganesh has done a good job and has put in lot of effort in thrilling sequences. Archana Gupta, who plays Ganesh`s love interest, looks cute but fails to emote. Avinash Bharadwaj, Mithra and others have done a better job. Sadhu Kokila`s comedy brings in a few laughs.

Circus is an engaging film which could have been a top class thriller if the director would have not added the romantic angle.