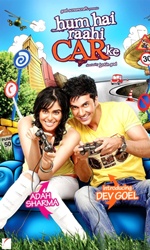 Shammi and Priyanka, played by newcomer Dev Goel and semi-newcomer Adaah Sharma, are chaddi-buddies. To prove it, he even flashes his chaddi in her face. Thankfully, he isn`t wearing it when this occurs.

This is one of the many irreverent scenes showing the couple`s comfort level that keeps recurring with discomforting frequency in the film with the potential to make us lough out aloud. Alas, the laughter is often waylaid.

The film comes from a banner that has given mainstream Hindi cinema such blockbusters in the past as `Dus Lakh` and `Ek Phool Do Maali`. Devendra Geol, who made these successful films is much respected. And when his grandson Dev Goel makes his acting debut in a film directed by Devendra Giel`s son Jyotin, we expect something special to happen.

"Hum Hai Raahi Car Ke" doesn`t quite deliver the kind of juicy punch-filled material that would showcase the Goel scion`s talents. What we see here is a film that tries very hard to be "young" (read: plenty of below-the-hip jokes, and conversations preambled by `Hey Dude`, `Check This out` and `Waddever`). It also in the same bustling breath tries to pay a backhanded homage to Sanjay Leela Bhansali`s love classic `Hum...Dil De Chuke Sanam`.

Ambitious, yes. But not quite up to the task.

In the midst of trying to be hip and cool and attempting to salute a classic, the narration packs in two hours of crazy out-of-control adventures that take our protagonists through a ziz-zag of zonked-out adventures that involve a notorious computer hacker on the prowl, a gorilla, who chases our hero while he is relieving himself in the jungles, suitors dressed in Spiderman suits, a goon, and five different roles for Chunky Pandey.

Playing a Parsi employer, a Sikh dhaba owner and so on and so forth, Chunky certainly seems to have fun.

It`s Juhi Chawla`s cameo as a paan-chewing Lucknowi doctor trying to explain herself to a South Indian nurse that brings the house down. Wish the rest of the film conveyed the same sparkle.

"Hum Hai Raahi Car Ke" is a fun-filled road movie zestfully driven by the director, but alas the road is littered with too many sleeping dogs. Dev Goel makes a confident debut. Hopefully, he will be provided with better material next time. Maybe a remake of `Dus Lakh` upgraded to `100 Crore`?