COMMANDO - A ONE MAN ARMY

Commando - A One Man Army 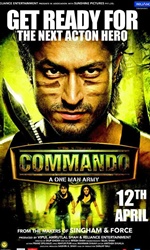 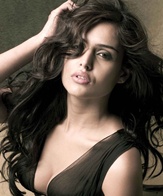 Commando - A One Man Army Review

`Commando` an out and out Vidyut Jamwal film (IANS Movie Review)
Rating: *** 1/2

Without the risk of exaggeration we can `safely` say Vidyut Jamwal takes the kind of risks in his action scenes that we haven`t seen in any screen-hero from any part of the world. The choreographic precision with which Vidyut flips, somersaults, and fells his adversaries is a sign of an exceptionally skilled action-hero.

Te be sure, a star is born in "Commando". We saw Vidyut completely upstage John Abraham in the hand-to-hand heart-in-mouth fight scenes in "Force". Now, Vidyut proves himself a maestro of unequalled sinewy skills, gliding rather than fighting, pre-empting the adversary`s moves almost like a chess game.

With tongue firmly in shriek mode, Vidyut in one of the early stunts scenes of the film rips open a poster of "Force" and attacks the baddies. The action never stops. And the song breaks, especially an item song in the second-half by Nathalia Kaur, are unwelcome speed breakers.

We really don`t want to see Vidyut romance the pretty Punjabi damsel in distress played by Pooja Chopra who seems a tad too well-groomed for the rigours of the jungle.

Not that we care. We just want to see Vidyut take on the bad guys, full-force. And boy, does Vidyut deliver!

Apart from those utterly annoying song breaks, there are no digressions from the dynamics of instant score-settling. It`s a straight one-to-one fight-to-finish between the silently simmering Commando and a satanic goon from a small-town in Punjab with no eyeballs and apparently no balls either, who believes the power of the gun and the strength of Santa-Banta SMS jokes can be co-ordinated in one range of activity.

Jaideep Ahlawat, last seen giving a riveting performance in Kamal Haasan`s "Vishawaroop", gives to the goon`s part a wacky spin. The man is half-devil half-imbecile. The goon makes Simrit (Pooja) an offer - either a suhaag-raat with him after the wedding, or a `suhaag raat` with him and all his battle-stained cronies right away? Hmmm?

Is it any wonder that the pretty spunky Punjabi lass makes a run for the jungles rather than accept the goon`s marriage proposal. Predictably, Simrit runs into the banished army-man, our commando-hero, who seems to have seen the collected Rambo series back-to-back at least eight-10 times.

The first time Vidyut plays the saviour at a bus stand, we know he means business. He is not just a one-man army, he is also the Indian army`s favourite bete noire. Despite the heavy burden of playing protector to country and the leading lady, Vidyut`s fights manage to bring in a lot of warmth and some humour in their execution.

The narration is an unabashed homage to Sylvester Stallone`s jungle-survival saga. And yet, thanks to Vidyut`s powerful screen presence the combat between the commando-hero and the goons never slackens in pace. The physical combats, which are undoubtedly the crux of the theme, propel the plot forward in leaps of inspired action.

Happily for Vidyut, his opponents are not shown to be ineffectual jokers. The back-and-forth of fists and rhetoric are uniformly engaging. Though we know exactly where the protagonist`s one-man battle against his enemies is heading, we never lose interest in the plot.

The film is shot on some interesting locations. The backwaters of Punjab and the thick jungles serve as just the right ambience for the rugged actioner.

Vidyut takes care of the rest. His action definitely speaks louder than his words.

Sejal Shah`s cinematography and Ritesh Shah`s dialogues constantly add to Vidyut`s fist-power, imbuing his combat to the finish with some unexpected flourishes of serious socio-political comment towards the end when we are told we need to clean up our act if we want to protect the country from external threats.

It`s a one-man-show off all the way. Pooja shows flashes of talent when she isn`t busy brazenly aping Kareena Kapoor`s voluble-Punjabi act from "Jab We Met".

Not her fault. If the hero is a silent seething ball of implosive fire, and the heroine is a talkative Punjabi girl who runs away from home to escape an unwanted marriage, `phir toh boss "Jab We Met" banta hai`.

To its credit "Commando" creates a climate of clenched conflict for the hero to vent his voluminous talent as a martial artiste.

Indeed, a star is born.

Action star Vidyut Jammwal, in collaboration with an online fashion e-tailer, recently conducted a fitness session with its employees and engaged them in high intensity and fun workout.Read More

Vidyut doesn't pick project on the basis of action scenes

Actor Vidyut Jammwal says he loves to do action films, but he doesnt pick his projects on that basis.Read More

Commando - A One Man Army Synopsis

The film is a high-octane, action-packed thriller starring Vidyut Jammwal who plays a special-ops secret agent for the Indian Armed Services. During one of the missions the commando’s chopper is shot down & is now behind enemy-lines.

From here on the commando embarks on a survival mission battling physically challenging environments, gun totting enemies in foreign land & is en route to his base. The commando uses his intense training, well honed survival & combat skills against the enemy in the face of this extreme environment.

Commando - A One Man Army Poster Commando - A One Man Army Stills

Commando - A One Man Army trailer 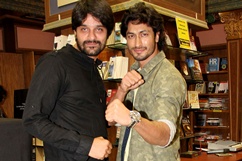