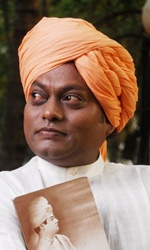 `Devarane` - watch for it`s comic moment
Rating: **
Lucky Shankar`s "Devarane" is a sarcastic commentary on how innocent people are exploited by fake god man and politician nexus. It has its moments of entertainment mainly in the first half, but later the narration takes a serious turn even making the audience to introspect over the current developments.

Yet, he has many failings in the film.

The film is fully loaded with dialogues and lacks visual strength. The dialogues are lengthy, preachy and sometimes boring. Shankar, who wrote some crispy dialogues in his previous film "90", has taken a different path this time only to make a negative impact.

Though he claims that he has written an imaginary story for this entertainer, comparisons are bound to be made with some controversial god men, who were in news for all wrong reasons.

Shankar ridicules the penchant of the channels to bring in astrologers, so-called god men, to studios and in process reinforce their superstitious beliefs.

The story revolves around Chitteswamy who loses all hopes of survival when all his attempts to earn money and lead a good life fail. He decides to end his life. But he is saved by a crooked, but intelligent person named K.K., who publicly announces that Chitteswamy is a god man with mythical powers.

Chitteswamy becomes very popular. K.K. builds up an ashram, where Chitteswamy starts meeting his devotees. Meanwhile, he falls for the charms of Sheela. A politician wants to exploit the situation to his advantage and induces K.K. to break with Chitteswamy.

A piquant situation is created when Chitteswamy has to bury himself alive. Ravishankar comes and rescues Chitteswamy and exposes the politician-god man nexus.

He has done a great job in his role of the controversial god man. His dialogue delivery, body language and expressions perfectly suit to give some credibility to the character. The film`s heroine Neethu has a brief role.

Sadhu Kokila, Bullet Prakash, Tabala Nani and Raju Thalikote, who bring in a few laughs in the theatre make a mark with their lively performance.

The retro song "My name is Chitteswamy" had become already popular before the film`s release, while the other songs are ordinarily composed. The camera work is good.

Shankar could have made a good film if he had worked out a good script eliminating all the lengthy, preachy sequences.

"Devrane" can be watched for it`s comic moments.