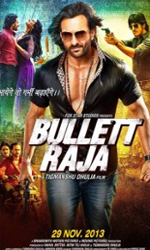 From Raj Kapoor and Rajendra Kumar in "Sangam" to Dharmendra and Amitabh Bachchan in "Sholay", filmy friendships have flourished with formulistic fervour in our films.

It takes guts to turn the conventional formulistic cinema about male bonding and revenge into a tightly wound intelligently scripted and judiciously executed drama of political subterfuge in Uttar Pradesh, a favourite haunt for Tigmanshu Dhulia's cinema, here turned into a hotbed of intrigue and drama.

"Bullett Raja" is woven around characters who aren't particular about the company or the morals that they keep. Politicians and entrepreneurs hobnob with criminals and criminals end up becoming heroes of the masses just because democracy in India gives us little to choose from.

Saif Ali Khan's Raja Misra (no 'h' in the surname, plij) is a scummy sort of Robin Hood in Lucknow whom we meet initially as he escapes with his life from goons in screeching cars by gatecrashing into a wedding. There he meets Rudra (Jimmy Shergill). Then begins a kind of affable bonding between the two men, and it goes beyond the precincts of the maudlin friendships we've seen in our films so far.

Saif and Jimmy, brilliant actors both, bring a kind of brusque but unbreakable friendship between them, a bonding that you know only death can break. And it does.

Dhulia, in his most mass-oriented cinematic outing to date, brings a lot of Jai-Veeru's "Sholay" bonding into play. The two actors do the rest. They gamely sink their teeth into the morass of Indian politics, giving a stirring dignity to inherently unsavoury episodes from the murky politics of Uttar Pradesh.

Dhulia's skills as a raconteur of remarkable aptitudes was most evident in "Paan Singh Tomar". Here, he attempts something even more daring. He merges mythological and historical allusions into current politics and he weds heroism and hooliganism without causing any discernible damage to his work's aesthetics.

Saif's character, a mix of goon and boon, gun and grins doesn't tire of reminding his adversaries of his Brahminical roots. He also has a strange penchant for quoting from the scriptures at the most inopportune moments.

This is a film about the scummy people who govern our country from the fringes. They are the kind of characters who either end up rich or dead. We can only curse them under our breath. And yet the spoken language of the characters remains liberated from overt profanities. The same goes for the characters themselves, so lowly and yet redeemed by unexpected bouts of humour and even compassion.

The way Saif's Raja Misra meets Sonakshi's sketchily-written character and the manner in which the script allows him to warm up to her without wasting time is a marvel of scriptural balance. Indeed, Dhulia in his most nakedly commercial outing, catches the routine friends-on-a-rampage plot by its lapels and goes for the kill with splendid skill.

This is a fearless film. It is not afraid to celebrate the much dreaded and abused traditional filmy formula. And then, Dhulia takes his audacity from city to city in Uttar Pradesh. The jagged but constantly coherent plot takes the very conventional characters (good-bad heroes, bad-bad villains, a damsel in distress and lots of decadent politicians) on a bumpy journey across the politics of the cow-belt where there are no sacred cows. Only brazen wolves.

The film's reckless momentum is sustained and controlled by Dhulia's technicians who hit the right notes while taking a route that hardly affords safe options. Dangerously careening towards an anarchic world, "Bullett Raja" swerves away from catastrophe underlining the plot and succeeds spectacularly in creating a world where rampage is the rule.

The soundrack is remarkably authentic, and I don't mean the awful songs. Our cinema, even the most mature variety, still adheres to the radio-play style of dialogue delivery where only one character speaks at one time. Tigmanshu Dhulia allows the words to spill out of his characters as and how they appear natural.

Saif's in full command of the spoken and unspoken language. Here's an actor who can bring gravitas to his character without weighing it down in self-importance. Saif has great support from the ever-reliable Jimmy Shergill. Their bonding is remarkable, and sometimes wickedly over-the-top.

Dhulia's treatment of violence in the hinterland is sharp and constantly tongue-in-cheek. Midway through the mayhem he brings in Vidyut Jammwal (described picturesquely as "Chambal Ka Chowkidar") to bring our scummy hero Raja Misra under control.

Do Jammwal's dexterous kicks succeed in stemming the mayhem? Boy, oh boy, do they! "Bullett Raja" is a subverted comic book adventure. Dhulia goes masala with a bang. And what a bang-bang!

Guns, girls (yes, even an item song by Mahie Gill where she insists she doesn't want to be touched when all her movements suggest quite the opposite), grime and glory come together in a layered tale of corruption, politics and kinetic camaraderie.

The songs brakes the pace. But then you really can't have a formula film without the song breaks.

It takes a politically savvy storyteller of Dhulia's skills to convert the lowest ebb of our politics into an occasion of high drama.

I always wanted to shoot in Chambal: Kay Kay Menon

Actor Kay Kay Menon, who is gearing up for the release of his upcoming film "Phamous", says he always wanted to shoot a film in the badlands of the Chambal ravines.Kay Kay was interacting with the media at the trailer launch of the film along with Jimmy Sheirgill, Pankaj Tripathi, Mahi Gill and director Karan Lalit Bhutani here on Thursday.Read More

Bullett Raja is an action entertainer that shows Saif Ali Khan in a never before seen avatar. He essays the role of Raja Mishra a commoner who gets transformed into Bullett Raja - a notorious, care a damn attitude gangster. A faithful friend and a loyal lover, living life on his own terms, setting his own rules, commanding respect and fearing no one, Bullett Raja in his true inimitable style takes on the system that creates people like him in a compelling struggle for power and ambition. Bringing together two powerhouses - Tigmanshu Dhulia and Saif Ali Khan supported by a multi star cast led by Sonakshi Sinha, Jimmy Shergil, Vidyuth Jamwal, Chunkey Pandey, Gulshan Grover, Ravi Kishan and Raj Babbar, this film has a huge universal appeal. With a story that's engaging with twists and turns this promises edge of seat entertainment with Saif Ali Khan in and as Bullett Raja. 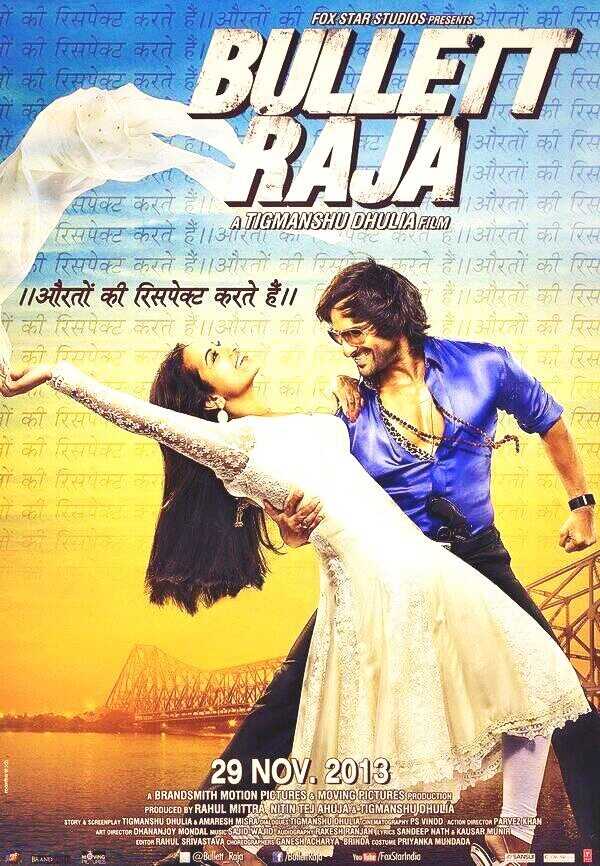 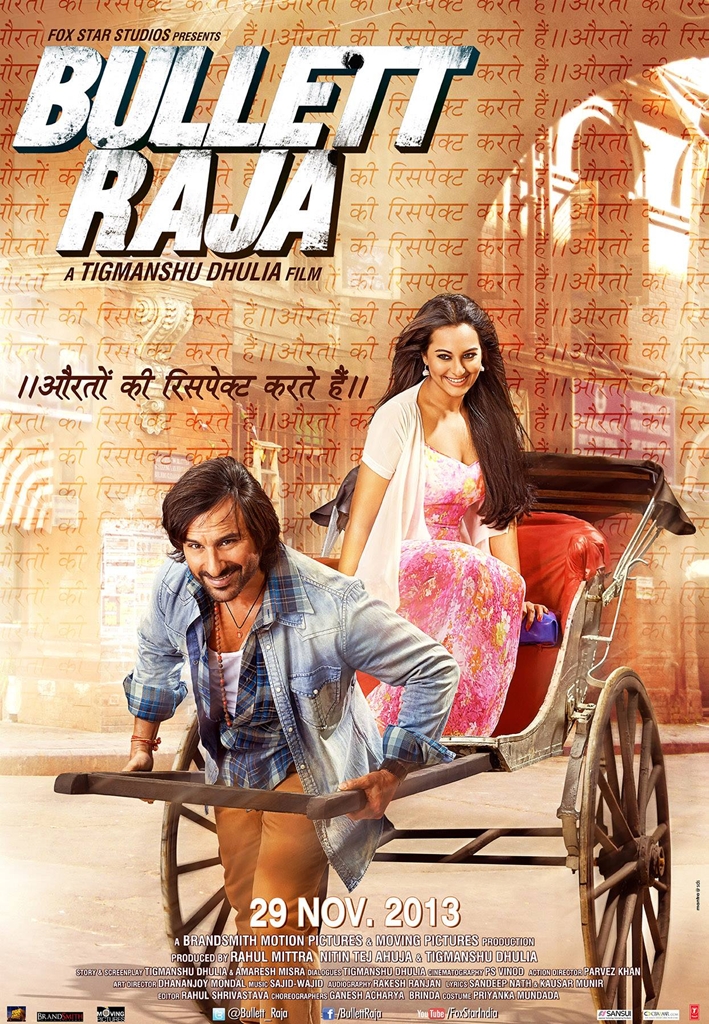 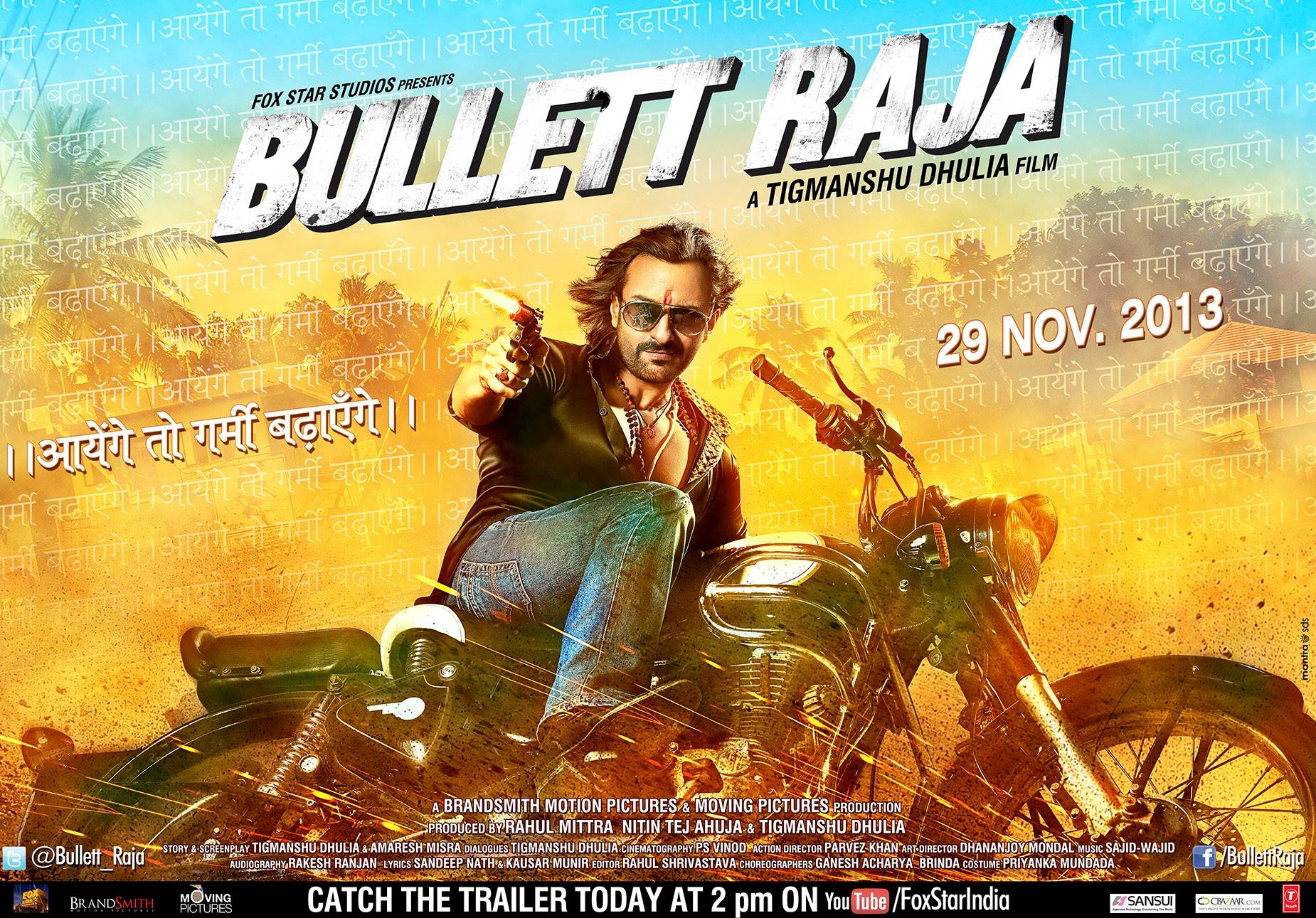 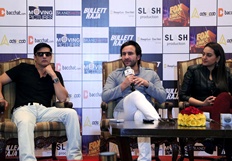 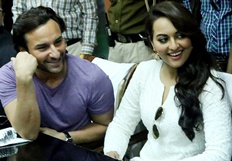 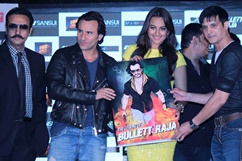