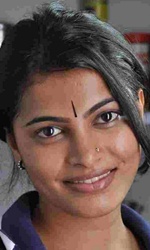 `Gombegala Love` engaging, newcomers wow audience
Rating: ****
"Gombegala Love" is a real surprise. Not only the audiences, even critics will find the film as one of the best efforts in the Kannada film industry in recent times. When most of the films made by newcomers are falling flat at the box office, "Gombegala Love", which has quite a few newcomers associated with it, make a strong impact on the viewers.

All thanks to the efforts of director Santhosh and fresh faces who have worked with great passion in the romantic drama. The film, which was not hyped before its release, stands out, thanks to its engrossing second half and great performances by newcomers like Arun and Pawana.

Santhosh also ensures that people sit up and take notice of him as a technician.

"Gombegala Love", about two lovers who are trapped by incidents in their lives, certainly offers an atypical storytelling technique than the usual formulaic films and, interestingly, there is never a dull moment in the narrative.

Santhosh, who has also written the story and the dialogues, has done a wonderful job in making a film that is sentimental and gripping.

He has also been successful in getting realistic performances from the lead artists. Every thing looks natural in the film - the costumes, the backdrop and even music gels well with the mood and theme.

Both Arun and Pawana have essayed their roles with conviction. Pawana looks extremely confident and has enough talent to take up bigger challenges.

She is very good in the first half, but second half belongs to Arun, who also proves his mettle as an actor.

Performances by established actors like Shruthi, Achyuth Kumar and Ramakrishna have elevated the quality of the film.

There are only two well-composed songs in the film. Written by Nagendra Prasad, they are quite meaningful.

Kiran Hampapara`s camera work is another highlight of the film and the great cinematography makes the film visually appealing.

Dialogues are crisp and hard-hitting.

"Gombegala Love", a fresh attempt by newcomers, will captivate the audience with its realistic and absorbing narration.