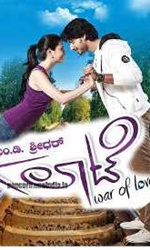 Sridhar`s `Galaate` not up to the mark
Rating: **
Director M.D. Sridhar maintained a good track record of making enjoyable commercial entertainers. He is referred to as a Minimum Guarantee director in the Kannada film industry. But his latest film "Galaate", made with romantic hero Prajwal Devaraj in the lead, dents his image.

Despite splurging on visuals and technical aspects, Sridhar`s "Galaate", which starts off as a romantic film, suffers because of the weak script and lack of continuity.

In the first half, the film becomes directionless, but narration slightly improves in the second half. What makes "Galaate" a disappointing fare is its not so good climax.

Sridhar has to blame himself for not choosing a credible story. There are hundreds of stories that have led to films like "Galaate" and the movie buffs do not have patience to watch films made on the same pattern.

Abhi and Ankita are friends. Ankita loves Abhi, but does not want to reveal her feelings. One day she takes him to a fashion show, in which her friend Shalini is participating. Abhi happens to like Shalini and wants Ankita to help him.

But Shalini is interested in pursuing her modelling career, while Abhi wants her to quit modelling and marry him. It leads to confrontation between them and later their parents have to intervene. The film, however, ends on a happy note.

Prajwal is good in action sequences, but somehow he has not shown any improvement in his performance. Kriti has shown that she can take up a variety of roles. Hardhika Shetty is a surprise packet.

But comedy sequences and Suman Ranganath`s glamour fail to enliven the audiences. Technically, the film is above average.

In short, "Galaate" can be described as an ordinary fare because of its weak story and illogical narration.