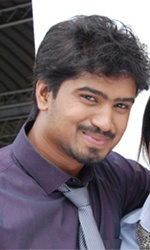 `Hosa Prema Purana` boring throughout
Rating: *1/2
"Hosa Prema Purana" is a film which is based on the concept of live-in relationships. Any person making a film on such an issue should have a broader vision, but unfortunately director Shivakumar, who has so far made some nondescript films, does not possess such an insight.

The story revolves around Prem (Nithin), who has a live-in relationship with Sanjana (Shraddha Das). A village belle Nandini (Radhika Gandhi) comes into the flat to see what is going on between the two.

One day Sanjana walks out of the apartment after having a hot argument with Prem. Now, Prem focuses on Nandini. What happens to this relationship forms the rest of the story.

Shivakumar has taken the issue of live-in relationship just to show the modern life of software professionals, which gives him enough space to add some glamour quotient. The women professionals in the film wear skimpy clothes, drink alcohol and smoke regularly. They are also shown to be immature people, who always quarrel for petty things.

In the film, there is no debate on the practice of live-in relationships, but a lengthy discussion on how married couples should lead their lives.

Actress Pooja Gandhi is there in a song sequence and a few scenes, which does not add up to the story value. The script and dialogues are not only weak but also do not have any logic at all. And the film is very boring from beginning to the end.

All the three actors Nithin, Shraddha and Radhika look totally disinterested in the project. They need some training in acting to take up complex roles.

It looks as if the director has given them a free hand to do whatever they feel like even in the emotional sequences. Cameraman Gauri Venkatesh`s work is below average. Rajesh Ramanath has composed two good songs.

"Hosa Prema Purana" is a badly made film on a serious issue.