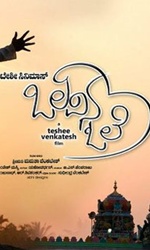 `Olavina Ole` suffers in narration
Rating:**1/2
The title "Olavina Ole" may be misleading to an extent as the film is not a romantic film or a story related to a love letter. The story relates to a real life honour killing incident that occurred in Mandya district of Karnataka, which had shocked the conscience of many people in the state.

The story is based on the life of two lovers, who got killed on account of the high handedness shown by the grandfather of the rich girl from an influential caste. The grandfather felt that protecting the honour of the caste was more important than the life of his granddaughter.

Mallige hails from a rich and influential upper caste family, who is loved by her family members. She falls for the intelligence of Narasimha, who belongs to a lower caste, but who feels human values are more important than anything. Mallige wants to marry Narasimha and proposes to him. But Narasimha rejects her proposal in the beginning, but later gives in after his mother accepts Mallige.

However, their love affair is not taken lightly by Doddaiah, an upper caste leader. Doddaiah, who is also the grandfather of Mallige, tries his best to create bottlenecks. The film ends as a revenge drama.

Director Teshi Venkatesh deserves appreciation for basing his screenplay on the real life incident even when caste conflicts have not subsided in several places in Karnataka, and only a few honour killing cases are reported. In a way it is similar to Maryada Hathya incidents in northern India.

The director has also tried to present the film authentically by choosing the right locales and selecting artists, who look real in their roles. He has been able to get good performances from many artists, and veteran actor Shankar Aswath stands taller with his ferocious looks and perfect dialogue delivery.

The film is not devoid of mistakes. For instance, the comedy sequences in the film are of poor taste. Nearly ten minutes of the film could have been edited to make it a little more interesting. The director seems to be too eager to put in all his thoughts in the film, as dialogues in many sequences are long and fail to make impact.

Newcomer Santosh has tried to put his best foot forward in performing a complex role. Neha Patil proves that she has been underused in the Kannada film industry so far. Her emotional performance is sure to impress. Shankar Aswath excels in the role of Doddaiah, while Auna Balaraj is another actress who makes an impact.

Technically, the film does not boast of any great work. Even the music by Yasho Vardhan is average.

"Olavina Ole" has an interesting plot but suffers in its narration.