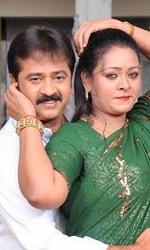 `Samsaradhalli Golmaal` lacks freshness
Rating: **
The film was publicised as a rollicking comedy with veteran artists performing completely different roles. But the film turns out to be a remake of Telugu movie "Aadivaram Aadavalakki Selavu" ("Holiday for Woman On Sunday"), directed by Dasari Narayana Rao, which had received an average response.

"Samsaradhalli Golmaal" lacks in technical aspect. The visuals are not impressive and the song composition is also below average. Though the film has remixes and medley of songs, it fails to take it to a new level. The story is old and lacks freshness.

The film talks about four families of different age groups staying in an apartment. The husbands are controlling their wives and the wives are always living in the shadow of fear. The story takes a turn when the women befriend an intelligent maid servant.

The power of running household affairs is transferred from men to women. Then the women`s committee in the flat decide that the women in the flat should enjoy a day`s holiday on Sunday, which creates lot of problems for men.

The men decide to apply for a divorce, which is resisted by a top lawyer from Supreme Cour, who comes to the city to fight for the rights of woman. Later, the differences sorted out and they reconcile.

National award winner Umashree stands with out in her performance. Superb dialogue delivery by multilingual actor Sai Kumar, who plays the role of a leading advocate of Supreme Court is also worth appreciation.

Shobharaj, Tara, Mohan, Anu Prabhakar, Mukhyamanthri Chandru, Lakshmi Bhagavathar, Sadhu Kokila have excelled in their respective roles. Surprisingly, Tabala Naani, who is so talented does not have sequences to prove his talent.

Sadhu Kokila has done a better work as an actor than a music director of the film. Kiran`s camera work is average. You don`t lose anything if you skip this film.