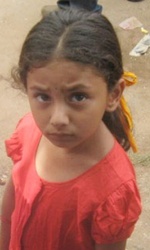 `Bannada Kode` - touching tale, but poor narration
Rating: **1/2
Directed by journalist-turned-film director Krishna Belthangadi, "Bannada Kode" rises several notches above an average film. But unfortunately Belthangadi`s efforts to take it to a higher level fail mainly because of his inexperience in the field of direction and his inability to write a good script.

Apart from the good performances by the child artist and character actor Yathiraj, the film also tries to be as honest as possible in presenting a simple story.

Apart from the budget constraints, the director`s inability to present the story in an interesting manner mars the film.

Camera work and background score are average. Music has nothing to rave about.

The story revolves around a young girl from a poor family, who wants to own a coloured umbrella. Realising that her daughter has a strong desire to buy the umbrella, her mother, who works as a maid, works harder to earn more money.

They manage to collect the money, but the girl`s alcoholic and unemployed father steals his daughter`s savings. After that the mother-daughter duo fail to save money for the umbrella and finally the young child`s ambition remains unfulfilled.

It is a simple story, but could have been narrated in a more interesting manner. One feels something more was required to make the script effective.

The outdoor locations are chosen with care, nothing looks unnatural in the film. Child artist Suhasini is good. Credit should also be given to Yathiraj, who shines in the final sequences of the film when he realises his mistake.

Technically, the film is poor but a film with a touching story like "Bannada Kode" needs to be encouraged. The director has tried to be honest, but has not been successful in his attempt.