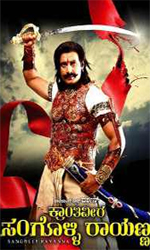 Despite a running length of nearly 180 minutes, the film looks colourful, rich and does not have a dull moment.

Raayanna is being hailed as the first person to have started guerilla warfare against the British rule, which was later followed by other freedom fighters like Alluri Seetharama Raju from Andhra Pradesh. A lot of care has been given to historical details in the movie, though some distortions can also be seen - like Raayanna`s love of a girl.

However, such minor distortions apart, the film is a huge spectacle marked by top class performances and superb technical work. The dialogues, written by Keshava Adithya, are also a high point. Naganna has also ensured liberal use of commercial elements in the film to show the heroism of Sangolli Raayanna. The film was publicised as the costliest film made in Kannada with an estimated budget of around Rs.30 crore. The making of the film stands to such a claim as the two war sequences shot for the film are brilliantly executed and expensive sets were erected to shoot the palace sequences.

The film starts with the British government seeking alimony as per the Monroe Agreement, which is resisted by Kitthoor administration, headed by Queen Chennamma. The local collector decides to wage a war against Kiththoor kingdom, but Chennamma and her trusted lieutenant fight courageously and win the battle. The British government seeks the support of some greedy persons to wage a war again and win. Chennamma is sent to prison, while Raayanna continues his fight against the British. But he is cheated by his own people, who conspire with the local British administration, and is arrested. He is sentenced to be hanged till death.

With a perfect body language and dynamism displayed in the title role, Kannada film industry`s superstar Darshan suits the role of a young and loyal freedom fighter. His dialogue delivery in the north Karnataka accent perfectly suits the mood of the film. And as usual, he excels in the action sequences. Jayaprada suits the role of Chennamma.

Nikitha Thukral, who has a brief role as Raayanna`s love interest, is impressive. All the veteran artists, including Shashi Kumar, Sreenivasa Murthy, Ramesh Bhat and others deliver stong performances.

Ramesh Babu`s camera work and Hari Krishna`s background score are the highlights of the film. Keshava Adithya`s dialogues make a strong impact, while the costume designer has done a great job with the period drama.

This one is a must watch for its brilliant presentation and Darshan`s superb performance.