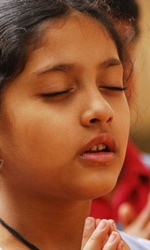 `Ball Pen` - innocent film with a message
Rating ***1/2
Kannada film actor Sreenagara Kitty and his wife Bhavana Belagere should be complimented for taking up the task of making a children`s film, a risk which very few people take. While on the one hand "Ball Pen" portrays the innocence and adventurous spirit of children, it also focuses on socially relevant issues like child abuse.

The film`s main attraction is, of course, the free-spirited performances by child artists, who have been selected for their respective roles after a lot of considerations. They child artists behave like children in the film and have not been shown as super humans.

While the entire film has been shot in a 5-D camera, it has been later converted into the 35mm format.

The story of the film revolves around a group of young children Keshava, Kempa and Bala, who live in an orphanage in Bengaluru. They decide to make a trip to a village in the most backward district of Koppal to save a child, who has fallen into a well.

The characters look realistic where in a young child starts distributing newspapers which enables people to read newspapers and know about things that are happening around them.

The film doesn`t have melodramatic overtones and the story has a lesson for elders too. While the story has been narrated neatly, some extended sequences may be a little bore. However, this flaw can be overlooked for a lot of positivity in film.

Director Shashikanth proves his mettle in his second film, for which he has also written the script.

He has used the children perfectly. Music director Manikanth Khadri has given some superb
compositions, while Rajakumar`s camera work is also worth a praise. Dwarki and director Shashikanth have written meaningful lyrics for the songs.

"Ball Pen" is a well made film. It can be watched both for children and parents. Such films should be encouraged.