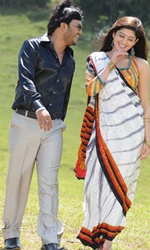 `Mr. 420` - not entirely enjoyable
Rating: **1/2
Pradeep Raj`s "Mr. 420" is a slapstick comedy without any logic in it. The director succeeded in his endeavour to entertain audience in the first half of the film, while the second half is marred by weak narration and dragging sequences.

Considering the impeccable comic timing that Ganesh has, it was laudable to sign him for the movie. However, the director seems to have lost the plot in the second half of the film. Many unnecessary elements have been incorporated, which weakens the film`s tempo.

Though "Mr. 420" is enjoyable, but only in parts. Despite being silly at various points, there are situations which make viewers have a hearty laugh.

The movie starts with Krishna and his uncle Ranganna coming to a city from a village and doing nefarious things like pickpocketing and robberies.

Later, Krishna encounters Rukmini, who starts liking him. Krishna also falls for her until Rukmini realises that Krishna is a pickpocket and a thief. She says unless Krishna reforms, she would not be able to love him. Krishna and Ranganna decide to change and takes up a job, as advised by Rukmini.

But he lands in trouble when a suitcase he was carrying, is found to have a skull of a dead person, who was a big don of the city. A police officer, who has an eye on Krishna and his uncle, arrests them. But they are soon set free by the henchman of another don. What happens later leads to many confusing situations, following which Krishna and his uncle are cleared from the charges.

The negative point in the film is the character of the don, played by the director himself. He doesn`t suit the character at all.

The film also needed a good editor to make it look much sharper and enjoyable. The songs are another weak point of the film.

Ganesh once again shines in a role tailor-made for him. His comedy timing and dialogue delivery is sure to please his fans. Praneetha looks glamorous and gives a neat performance.

Rangayana Raghu and Sadhu Kokila over act, but in this silly film, everything looks fine.