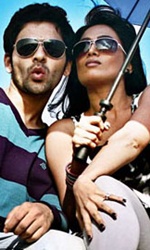 CYNMPK a bad experiment
Rating: * 1/2
"Cyber Yugadol Navayuva Madhura Prema Kavyam" may have a long title, but it may not play long innings at the box office. Made by a team of youngsters, CYNMPK seems illogical and lacks any cinematic values. One can conclude that over enthusiastic youngsters failed to understand the grammar of filmmaking.

It may come as a surprise to viewers that its director Madhu Chandra had assisted a top director like Upendra during the making of "Super". But it seems he failed to learn nuances of making an interesting and engaging movie.

The major drawback is that he tries to tell so many things in his debut film and it just creates confusion. One fails to understand the concept of the movie.

It focuses on live in relationship and confusion about love among youngsters, but fails to narrate it convincingly.

Madhu Chandra`s script fails to interest audiences. A youthful love story slowly becomes a tedious watch and dialogues do not make any sense and fail to connect with the main plot.

The film`s trailers and songs created a lot of curiosity among viewers, but it doesn`t live up to the expectations.

However, music director Vasu Dixit and Abhilash should be appreciated for their contribution.

Nothing could be written about camera or editing work in the film.

Newcomers Gurunandan and Shwetha Srivastav dominate the screen space, but fail to make any impact. But some sequences show that Shwetha can be groomed into a good performer.