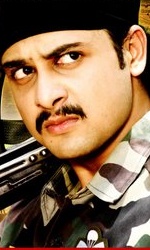 Poojar has also written the story and he might have added some of his own first-hand experiences while countering terrorism. His intention is really laudable, but one needed a director with a world view to handle such an idealistic story.

With a poor record as a director, Venugopal was certainly not the right choice to narrate the profound script on screen. He has not only messed up the subject, but also failed to extract competent performances from the cast.

In short, Venugopal has failed to translate the patriotic elements into an emotional drama on screen. He just tried to make another potboiler, which drags on and tests the audience`s patience.

Another flaw in the film is Sandesh. Poojar`s earlier film "Ee Sambhashane" with his son Sandesh was a disaster. It suffered mainly because of Sandesh`s failing as an actor.

Rather than training him to become a dependable actor, Poojar has given him additional responsibility of playing a dynamic and patriotic army officer`s role in "Jai Hind". And this time too, Sandesh has failed to do justice to the role.

In the film, Bharat is a dreamer who feels that protecting his motherland is the most important job for an army officer. He wants to eliminate all the terrorists who are creating problems for the country.

In his endeavour, he fights a twin battle -- on the one hand he is fighting with terrorists, while on the other, he combats inside forces who are protecting terrorists.

How Bharat wins his battle against terrorists and traitors form the rest of the story.

Despite being an experienced artist, Pooja Gandhi doesn`t look convincing in her role. Her body language and emotions prove that she has not understood the importance of her role.

Veteran artists Ramesh Bhat, Shobharaj and Sathyajith have just performed in their own way. Thriller Manju is wasted.

While the camera work of Suryakanth Honnali is better, Krishnavardhan Kulkarni`s music is below average. Editing work is also mediocre.