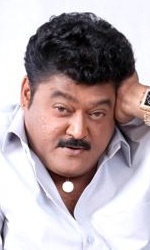 `Manjunatha BA LLB` is disappointing
Rating: **
Veteran actor Jaggesh`s "Manjunatha BA LLB" is certainly not like his previous film "Edhdhelu Manjunatha", directed by an intelligent director like Guru Prasad, who wrote and narrated his script very well on celluloid.

This film is a remake of 2007 Malayalam hit "Hello", starring Mohan Lal and Parvathi Melton. One thing that was strong with "Hello" was the tight script by director-scriptwriter Rafi and Mecartin, which captivated the audience. But the Kannada remake does not have such positive elements.

The story goes like this - The film`s protagonist Manjunatha is an advocate, but he is always drunk and refuses to take any assignments. He feels his parents are responsible for the death of his wife. A telephone call from a woman in distress changes his life. He finds that a girl called Sneha enters his house pretending to be his wife. Manjunatha is surprised over her sudden entry, but he makes intelligent moves to find out her background.

She owns a big property, but her scheming relatives want to usurp her property. Later, Manjunatha unveils the mystery behind Sneha`s entry and exposes the crooked designs of her relatives.

There are boring elements in the film and its climax is surely a big let down. Though director Mohan has tried to salvage the fim by writing some good dialogues, he is handicapped by the poor production values. Jaggesh and Tabala Nani`s combination does not fully work in favour of the film. The urgency with which the film was made is clearly visible on the screen.

The film`s heroine, Reema Worah is miscast in the film. The lesser said about the technical values, is better.
Jaggesh is a very fine actor, provided he has well written sequences. But his role in this film does not suit him. He fails to make an impact despite working hard to deliver comedy punches. The film`s second heroine, Spoorthi is much better than the lead heroine Reema.

Veterans Sreenivasa Murthy and Girija Lokesh are impressive. There are too many comedy actors in the film, and they have performed their roles with ease. Poor technical values like ordinary camera work and composer Vinaya Chandra has done average work in the music department.

"Manjunatha BA LLB" is sure to disappoint you if you are looking for some good fun or entertainment. At best, it is just a unique combination of comedy, thrills and some good dialogues.