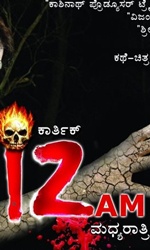 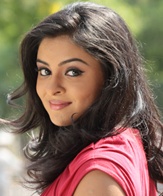 After a long hiatus, he returns with 12 A.M. and once again launches two new faces - Karthik, who has directed the film, and debutante Divya Sridhar in the female lead.

Kashinath`s son Abhimanyu, who made a debut with a nondescript film, works as a protagonist in the horror thriller.

12 A.M. has good technical element, but story wise it has the same ghost seeking revenge theme and same techniques are used to scare audiences that were seen in the 1960s and 1970s movies.

Initially these scary elements shock, but after some time they fail to make an impact. 12 A.M. does not fall in the category of well-made horror thrillers like Bhoot or Phoonk.

But despite that the film works and what saves the film is twists in story that come at right time and take the story forward. The twist in the interval scene is admirable.

Another high point of 12 A.M. is that it breaks the monotony of the stereotyped love story or so-called action films by delivering a new kind of story.

It may not be a perfect horror movie, but makes viewers laugh and keeps them on the edge of their seats in some scenes.

The story has an old flavour and reminds one of an era when Kashinath tried to make his own brand of films that combined humour, horror with a dose of double meaning dialogues. Thankfully, the dialogues are crispy in this one.

Shalini and her friend Trishul are students in a medical college. Shalini is an assertive, straightforward girl and does not take nonsense from anyone.

When a politician`s son tries to bother her, she hits him with her sandals. But the guy doesn`t forget the insult and kills Shalini while she was going somewhere with her four friends.

Shalini`s ghost now lives with Trishul and the director manages to conceal this fact till interval. She wants to take revenge from her friends who ditched her when politician`s son attacked her.

Trishul comes to know about it and approaches a `tantrik` from Kerala to help the soul of his friend.

Abhimanyu has worked hard to look convincing, while Divya Sridhar scores well in her debut role.

Kashinath as a professor also does a good job, while other newcomers too look convincing in their respective roles.

But it is the film`s technical side that scores well. Umapathy, younger brother of Kashinath, has done a fantastic job behind the camera.

If you like horror movies, then do not miss 12 A.M.