U ME AUR HUM

U Me Aur Hum 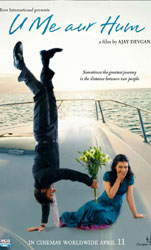 U Me Aur Hum Review

Nothing that Ajay Devgan has done in the past prepares us for the poise, poignancy and sensitivity of his directorial debut. U, Me Aur Hum is one of those tender and tactile melodramas that leave you with minty thoughts and dewy eyes.

The heart is completely at the right place as Ajay, turning director with a élan that thumbs its nose gently at all those who scoff at his actioner`s antecedents, tells the story of a husband whose gentle ministrations take his Alzheimer`s stricken wife from her absentminded youth to blanked-out old age.

The journey gives us insights into the man-woman relationship and the intricate commitments of a marriage as seen through the eyes that go beyond the romance and excitement of courtship to an area where dark clouds gather over a relationship and threaten its annihilation.

The trick, says Ajay`s soft but persuasive film, is to hold on, to value the things that make life worth living. There is an interesting reversal of the age-hold cinematic formula where the husband is looked after by the wife through rain and shine.

Ajay plays the caring husband who wins the feisty (if it`s Kajol it cannot be any other way) waitress on a cruise that seems to go on and on and on.

Luckily, the narrative doesn`t get `see` sick. To be sure, the film could have avoided a prolonged courtship that tells us nothing more about life than what we don`t already know in the first 15 minutes.

Ajay gets to the point halfway through. The narrative quickly comes to grips with the theme as the solemn doctor (Sachin Khadekar) announces the absent-mindedness, which has been stalking Pia for a while, is actually Alzheimer`s.

The realisation of the gravity of the illness, coming to terms with it and finally recognizing the reality of an unshakeable love and faith beyond the obvious hardships of a troubled compatibility.... these are themes that are given a surprisingly low key treatment by the first-time director.

Ajay`s directorial speciality is the interweavement of the characters through some wittily and cleverly written dialogues (Ashwin Dheer), which always tell us more than what we hear.

The film`s substantial emotional impact depends entirely on the performances, not just Ajay and Kjaol but their two sets of friends - Sumeet Raghavan and Divya Dutta as the constantly quarrelling divorce bound couple, and Karan Khanna and Isha Sharwani as the soon to be wed couple.

Sumeet is a special revelation. He`s quiet and attentive in scenes that require him to be that.

But of course the chemistry between the lead players guides the destiny of this remarkable film. Kajol`s powerhouse performance, punctuated and italicised by moments where she hungrily sinks her teeth into emotional depths seldom afforded to commercial actors, comes as no surprise.

However, her makeup sometimes gives her a caked look. Never mind. This is a film where we can easily look beyond the mask.

Ajay bowls you over. To find him measuring up to his wife`s dizzying histrionics is an amazing experience. Jim Broadbent looking after his Alzheimer`s-stricken wife Judi Dench in Iris couldn`t have done better.

One sequence in the restaurant where Ajay is required to give a long, bitter and ironical monologue on man`s innate selfishness after he leaves his wife at a care centre, will stand out among the sincerest expressions of the human ego seen in cinema.

Ajay`s command over his craft and the language of heart take you by surprise.

Some of the sequences showing Kajol`s mental blanking-out are so vivid they make your hairs stand on end. That nerve wracking moment when the mother nearly ends up drowning her baby in the bath tub or that poignant interlude when the husband leaves his wife at the hospital are so wonderfully devised and executed you wonder which came first: the thought to make a film on Alzheimer`s or the characters who inhabit this dark yet uplifting theme.

The film has its flaws. It sometimes tries too hard to be trendily philosophical in its dialogues and ends up sounding phoney.

The pseudo-philosophical lyrics for the songs sound like cheap rip-offs of Gulzar. Also, the narrative doesn`t seem to follow the linear path.

The back-and-forth editing pyrotechnics where key incidents are recreated in flashy flashbacks are distracting. However, Aseem Bajaj`s cinematography does much to create a smooth homogenous look and mood for the narrative.

The film takes us through a world of love pain and acceptance with such transparent honesty of purpose that at the end of it you only wonder one thing... why can`t more movies be like U, Me Aur Hum?

U Me Aur Hum Synopsis

Ajay (Ajay Devgan) was more than tipsy when he first saw Pia (Kajol). For him, it was love at first sight. She served him drinks. But more than alcohol, it was Pia’s natural beauty that intoxicated Ajay.

Pia was not amused when she saw Ajay for the first time. She watched him make a fool of himself over a few glasses of alcohol, and she heard him making lofty claims of true love for her.

Pia was relieved when Ajay passed out. Little did she know that in this short encounter, the cupid had already done its job!

After his disastrous first attempt at wooing Pia, Ajay tries more sober ways. He keeps awake at nights to take lessons to be able to dance with her. He sneaks into her cabin to read her personal diary.

As usual, perseverance pays back and Ajay ends up making a positive impression on Pia. He eventually wins her heart. In each other, Ajay and Pia find an anchor.

But the tide goes against them. Weighted down by lies and deceit, their boat is rocked, and their relationship drowns. Pia walks out of Ajay’s life.

But Ajay waits for Pia. And she comes back to him. With no doubt in their minds about the way they feel for each other, they rush into marriage, despite the advice and failing relationships of their friends.

Happy marriages begin when we marry the ones we love, and they blossom when we love the ones we marry. Ajay and Pia love each other dearly, and their marriage flourishes, setting an example for their friends.

But no marriage can be complete without problems, and Ajay and Pia also have to face hurdles, some of which seem insurmountable.

Do Ajay and Pia battle against all odds? Or do they simply give up? Will their love emerge victorious? Or is their love story destined to have a bitter end?

‘U Me Aur Hum’ is an extraordinary love story of two ordinary people – Ajay and Pia. There may be no monuments dedicated to them and perhaps their names will soon be forgotten. But their love remains exemplary, unshaken and unchanged through the course of time.

U Me Aur Hum Poster 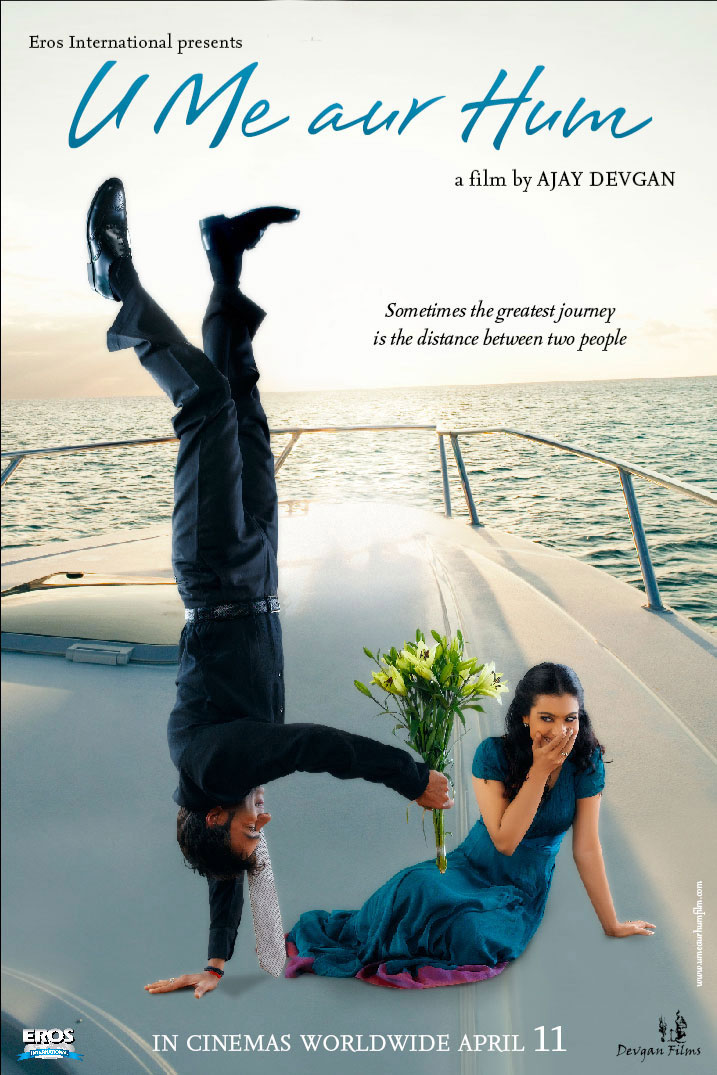 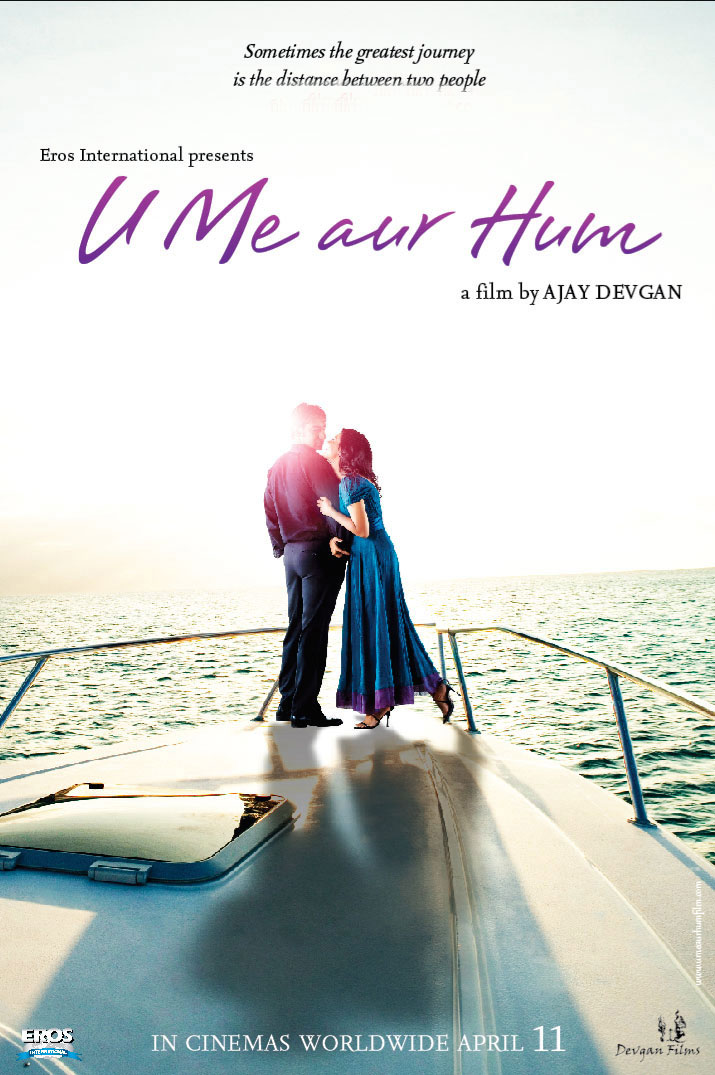 U Me Aur Hum Stills