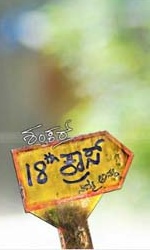 `18th Cross` - not worth the wait (Kannada Movie Review)
Rating: **
This was a film started nearly six years ago, but could not see the light of the day for so long mainly because of the death of its producer Chikkanna in between. Later his wife took over the production responsibility of the film.

Had the film released in time, it would have marked the acting debut of Radhika Pandit, who is currently the reigning actress in the Kannada film industry.

The fact that the present musical sensation Arjun Janya had composed the music for the film also fuelled some interest in the film. Naturally for any person interested in seeing this film, there may be a sense of inertia mainly because of a nagging feeling that the film may be outdated.

The story goes like this - Jeeva is being wrongly implicated in a murder by the police. But as it is known later, his opponent Benne Krishna, who has masterminded this murder, frames Jeeva. An enraged Jeeva wants to come out of this web and decides to be the king of underworld.

Meanwhile, he is also in love with Punya, a middle class girl who is in awe of him. When the battle is on, Jeeva wants to marry Punya and run away from the locality. He tells her to come to the 18th Cross when police ambush and kill him in an encounter.

Surprisingly despite being outdated, 18th Cross is not all that bad and there are quite a number of interesting sequences. But it can`t be called a good film either.

The reason? Director Shankar has just tried to cash on the success of many successful underworld films in Kannada. There has been a quantum leap in the technical values of films in general in the Kannada film industry and rich production values have become a common feature when action sequences are shot. Also, there has been a big shift in the way even ordinary stories are narrated on screen these days.

Therefore it would be difficult to digest the narrative mode of 18th Cross. There are a few entertaining elements in the film, which ends on a tragic note.

Radhika looks cute on screen while Shishya Deepak has done justice to his job of executing the ordinarily shot action sequences.

The first half is slightly better, but the second half is full of gory violence and tragedy-filled sequences. The film fails to engage the audience in the second half.

Vinaya Prasad and Ramakrishna have performed their roles with ease.