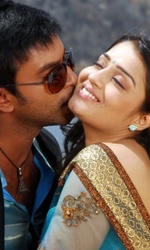 Due to poor production values, even the emotional scenes taken from the original film, don`t create any impression.

Ganesha is a good human being, who takes care of people in need. He is eager to get married, but his attempts fail as he wants to remain truthful and wants to give his full details, either negative or positive.

After continuous rejections, Ganesh comes across a girl named Vidya, who agrees to marry him. But on the day before marriage, Vidya elopes to get married to her boyfriend.

A dejected Ganesh takes the blame on himself and walks out of the marriage hall. But Divya`s father, who feels humiliated, takes on the onus to get Ganesh married to a good girl.

Ganesh`s dejection gets converted into confidence when he meets Shekhar Nag, a physically challenged person facing adversities with courage.

Ganesh goes to Hiriyur to see a girl along with Divya`s father. There, he meets a girl who had earlier rejected him. Thereafter follows the climax.

Gowri Putra is an average affair. Though it is a family-oriented story, it has been presented badly.