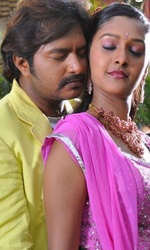 `Paper Dhoni` shoddy work of Nayak
Rating: *
R.K. Nayak`s directorial debut Paper Dhoni deals with many current issues. It is difficult to name one contemporary issue that has not been included in the movie. The film has all the possible answers to problems plaguing the world, but is is difficult to digest those solutions.

On wonders why the film is titled Paper Dhoni, when it tackles issues liketerrorism, corruption, poverty, illiteracy. The director tries to provide his own solutions to these problems.

Unlike other commercial movies, Paper Dhoni tries to be serious by bringing out issues that may be totally irrelevant to the story line. May be the director wanted to show that he is well aware of problems in the country and abroad.

It starts with a local incident and as the movie progresses it delves into international issues. But the director`s imagination and his own narration fail to synchronise as a result the film becomes a tedious watch for viewers.

The only saving grace is the film`s hero Naveen Krishna who sincerely tries to make it work.

Chethan, a rag picker, wants to find solutions to the world through some software technology. He dreams big and wants to build an empire like Microsoft. He creates a software called, which helps ordinary people to find solutions to problems. But the idea of cleansing public life doesn`t go well with greedy politicians, fake godmen, international terrorists and scores of anti-social elements.

Will Chetan win the war against them to realise his dream?

Naveen is impressive in his dialogue delivery and also in his performance. But he could not do much as his own characterisation is confusing and weak. The film`s heroine Shantala comes and goes.

Veteran actors like Avinash, Vinaya Prakash and Adi Lokesh have been wasted.

Paper Dhoni is a below ordinary fare.