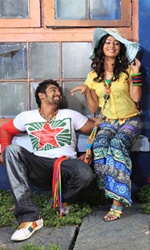 Director A.P. Arjun`s "Addhuri" comes as a breath of fresh air in the stagnant Kannada film industry. It has all the elements that can make it a big hit. Though launching fresh faces with Dhruv and Radhika Pandit was a challenge, Arjun has emerged with flying colours.

"Addhuri" does not boast of a great story, but what makes this film special is the way the director has narrated a simple plot on screen.

The story revolves around two characters named Arjun and Poorna. Arjun meets Poorna and instantly falls for her. Poorna is in no mood to follow suit. She has her own confusions and does not want to commit her love for Arjun. But later she understands the deep love of Arjun towards her and accepts the proposal.

Poorna`s father decides to get her married but she wants to tie the knot with Arjun. They decide to get married but Arjun fails to make it to the sub-registrar`s office on the D-Day.

An infuriated Poorna decides to stay away from Arjun and agrees to marry the person her father had selected for her. Arjun returns and pleads to Poorna to get back.

Both Arjun and Poorna agree to be together and visit places they had frequented during the time when their love blossomed. What happens to Arjun`s love is revealed in a touching climax.

It`s not that "Addhuri" doesn`t have any flaws, but what makes you overlook them is the tempo that the film takes post-interval. The tempo is maintained until the climax.

The first half is breezy. There are sequences, which are little slow in narration. The beginning of the second half is also slow. However, the sequences towards the climax are the best seen in recent times.

Writer-director A.P. Arjun wins the battle by creating an emotional feel in the climax.

Debutant Dhruv has lots of energy and has shown his prowess in dance and fights. He is also good in comedy and emotional sequences. The training he had gone through before the shoot began seems to have helped him.

Radhika Pandit, who is four-film-old, has once again proved why she is regarded as one of the awesome talents in the industry.

She charms the young hearts, but at the same time can make audience emotional with her performances. Tarun`s inclusion in the film was a well-kept secret, but the actor has really made an impact through his role.

"Addhuri" is a film that`s good-looking, fun and topped with emotions.