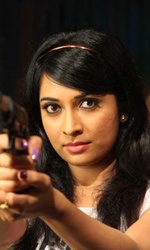 Films made by some noted directors are expected to offer different concepts and writer-director Nagathihalli Chandrasekhar`s films fall into the same category. His films are critically examined by fans for its content. But "Breaking News" is an ordinary effort by the director known for making impressive movies like "America, America", "Baa Nalle Madhuchandrake", "Nanna Preethiya Hudugi" and "Amrutha Dhaare".

However, the director, lost the track in his previous film "Nooru Janmaku", which was a disaster. "Breaking News" is slightly better in its content and presentation, but Nagathihalli`s failure as a director and scriptwriter is easily visible in the film.

It is the effortless performance by Radhika Pandit and Ajay Rao that salvage the film to some extent, otherwise it would have been another forgettable film.

Nagathihalli`s scritps are usually based on contemporary social problems and continuing the trend he focuses on television channels in "Breaking News" and shows how they go overboard in their bid to do breaking stories.

But the screenplay lacks interest and there is no freshness in the narration. He has been able to get things right in a few sequences.

Arjun works as a programme executive for Sakala TV, but his programmes fails to attain popularity. Meanwhile, the Lokayukta in the state prepares a report on the involvement of a minister in denotifying land around Bengaluru.

Meanwhile, the minister plans to kidnap Lokayukta`s daughter. Arjun busts his plans and hides away Shradha in a safe place. The kidnap story is telecast on Sakala TV, much to the surprise of the rival channels. Shradha`s kidnapping creates a big commotion in the state.

Ajay Rao has done a good job as Arjun. He adds credibility to the film. But Radhika Pandit is the showstealer as the pampered daughter of Lokayukta. Her prankish acts and her energy levels in dance sequence are sure to attract young audience. She has also done a little bit of action scenes.

Although stephen Prayog`s has churned out two good songs - "Hudugi baare odi hogona" and "Sari sari", the music is inconsistent and does not match up with the mood in the film.

Krishna Kumar`scamera work is very good, but editing should have been a little crisper.

"Breaking News" does not match the expectations it had created, but yet it is watchable for energetic performance by Radhika and Ajay.