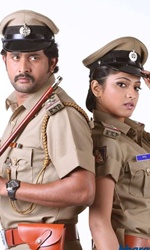 Despite flaws, `Kiladi Kitty` worth a watch (IANS Movie Review)

Directed by Anantha Raju, "Kiladi Kitty" is the remake of 2008 Telugu film "Blade Babji", an Allari Naresh-starrer, based on Hollywood film "Blue Streak". However, "Kiladi Kitty" lacks the tempo of both the afore-mentioned films.

It seems as if the director was in a hurry to complete the film. He simply seems to have followed the original Telugu film to the hilt, and hasn`t tried to add any native elements.

The story revolves around Krishna Manohar aka Kitty, and his friends, who plan to loot a bank and get lots of money to purchase a land, where poor people live. The owner demands money for the land or the inhabitants have to vacate it immediately.

Kitty and his friends loot the money in a bank in Mangalore and place it in a hideout in Bangalore. However, the hideout turns out to be a police control room.

He poses as a police inspector and enters the police station in a bid to find the money.

In his attempts to get into the exact place where his money is stored, Kitty also does some good work as a police officer and is on the verge of a promotion.

How he and his friends manage to get the money to save the poor people from being thrown out of their colony, forms the remaining narrative. Most of the artists have really provided a lively performance in the film.

Though the first half of the film is slightly better, it loses its tempo completely in the second half. The dialogue writer has not used the idioms peculiar to Kannada language. It looks like just a translation of the dialogues of the Telugu version of the film.

Except for the original songs, different artists and choice of locations, the film looks every inch like "Blade Babji".

Raju has been following the process of remaking the original film as it is in his previous ventures like "Mast Majaa Maadi" and "Swayamvara" also.

What has saved the film is the glamour quotient added by actresses Haripriya and Niveditha, and a comical performance from Sreenagara Kitty, Sharan and his other friends in the film.

Actor Kitty, who has always done serious roles, has managed to give an impressive performance as a fake police officer with his antics and body language.

Jessie Gift, though not at his best, has been able to provide good tunes for two songs. Ravi Kumar Sana, the cinematographer, showcases his talent again through this film.

"Kiladi Kitty" has some shortcomings, but is worth a one-time watch.