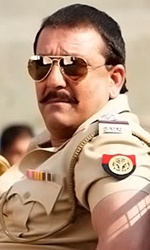 `Zila Ghaziabad` - a disorderly orchestra with competent actors
Rating:**1/2
Wasseypur`s gangs never had it so good. Seeing the glorious guttural outflow of blood, bullets and profanities in "Zila Ghaziabad" one could safely assume, Wasseypur is safe. So is the other release this week.

Abhishek Kapoor`s "Kai Po Che!" is as far removed from its Friday competition as flying kites is from a hail of bullets.

To be fair one can`t compare two films as disparate in intent, purpose, tone and treatment as "Kai Po Che!" and "Zila Ghaziabad" ... except for the fact that somewhere down the line as we approach the crux and the core, both films say the same thing.

If you want to survive in this cut-throat world, you have to recognise your own weaknesses and strengths -- not that one sees the hurried restless unanchored strangely identity-less and vapidly violent characters of "Zila Ghaziabad" ever doing any introspection.

Where is the time to sit and think when everyone is out for a kill? The biggest casualty in all this gore-mongering is a logical pattern of storytelling. The material is edited more to accommodate optimum punches and punchlines than to tell an anchored story. The narration leaves no room for any kind of emotion to take root.

And that`s where the fun side of the film unleashes with fatuous fury. The action director is the real conductor of this disorderly orchestra. One violent outburst follows another as two clans of Zila Ghaziabad battle it out to a bloodied end.

Admittedly, the action is staged with a whole lot of gusto. Tragically, the underlining humour of Salman Khan`s "Dabangg" is missing here. These scowling, growling, barking and biting characters take themselves and their anarchic hinterland too seriously.

They speak in a self-confident drawl in words about bodily functions that Vishal Bhardwaj or Anurag Kashyap`s characters might use on very lazy Sunday to shock their neighbours. But make no mistake. The people who inhabit Zila Ghaziabad mean business.

The business of being mean is perpetrated in a torrent of rapidly-staged drama where aggression is King. The film has a sprawling banquet of actors, and some very competent ones at that.

Sanjay Dutt delivers a punch-filled performance as a cop inured to ambivalence. He strikes swaggering postures that suggest John Wayne never really hung up his hat and boots. Vivek Oberoi, who was gloriously goofy as a bumbling gangster in last week`s underrated "Jayantabhai Ki Luv Story", here displays a mean streak quite convincingly.

So does Arshad Warsi, better known for his comic acts, here slipping into a rugged roguery with relish. If you look around, Chandrachur Singh and Paresh Rawal also show up to add muscle to the mayhem.

Every character seems to have fun with his part in this Khichdi Western, a distant doomed dastardly spiced-up teekha cousin of the celebrated `Spaghetti Western`, though whether we as the audience share the characters` sense of enjoyment or not depends entirely on the frame of mind we are in.

If judgemental, one could be deeply offended by the unstopped flow of aggression and profanity. However, if in a lenient mind-space, the bloody battle for indeterminate causes could provide some amount of lowbrow fun.

As expected, in this ode to mayhem and machismo, the ladies have little to do besides shake a leg and shed a tear. Minissha Lamba shows up somewhere along the way trying hard not to look lost in the stag party.

It`s hard not to laugh out loud at these heroes of a subverted hinterland who live and die by the gun. They deserve the death they get.

But what about us?

Zilla Ghaziabad is a Indian film currently scheduled to be released in early 2012. The plot is loosely based on a gang war between two rival groups of Satbir Gurjar and Mahender Fauji (a series of real life incidents) which happened in Ghaziabad. The film is directed by Anand Kumar, whose previous film was Delhii Heights.ivek Oberoi will be teaming up with Sanjay Dutt and Arshad Warsi for this film and it is produced by Vinod Bachchan of ‘Tanu Weds Manu’ fame. The film crew comprises of cameraman Ahambaram, writer Vinay Sharma, action director Kanal Kanan, choreographer Ganesh Acharya, editor Bunty Nagi, production designer Bhola Malviya, art director Pradeep Singh, EP Vishal Singh, song Bhuta Singh and line producer M.J. Ramnan.