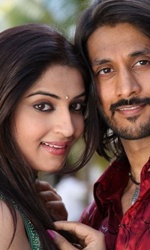 Dashamukha is an off-beat film which sets you into a process of introspection about the existing justice delivery system.

In many ways, the film may look like an experimental film, which is thoroughly engaging and gripping in the second half.

Both producer Soorappa Babu and director Ravi Srivatsa have to be complimented for showing such courage to make an out-of-the-box film that does not show Ravichandran`s romantic image or any heroism, but focuses on the realistic details of a controversial case. In totality, Dashamukha is different and likeable.

The story begins with a youngster named Agni facing serious charges of killing his father in a rage. The judge, who is hearing the case gets confused and appoints a 10-member committee to look at all the aspects of the crime and advise him.

The committee looks at the case and nine out of the 10 members are convinced that Agni has indeed killed his father. But Ravindranath is the lone member who disagrees with this contention.

As earlier said and underlined by the film`s makers, Dashamukha is heavily inspired by the 1956 Hollywood classic Twelve Angry Men and the Kannada version is made with lot of changes to suit the contemporary legal system.

The film was made as a Kannada drama titled as Aa Mukhagalu, staged in the early 1980s, and it was also made as a Hindi film titled Ek Ruka Hua Faisla also in the same decade.

The second half is quite interesting but the first half, especially the first 30 minutes of the film, is quite taxing on the audience.

With such a tedious start, it is difficult to expect a miracle from this film. But in a positive turn of events, the film picks up tempo and becomes quite interesting to watch.

The film`s poor production values are kept at barest minimum which may well ensure the return of investment for the producer, but the film could have been made on a wider canvas.

Nevertheless, it has top class performances by Ravichandran, Avinash, Anant Nag and Devaraj.

Chethan, who has a relatively small role, brightens up the screen whenever he appears. But Mumbai-based Akanksha, who essays a polio-struck girl has a limited role to play.

Akanksha looked very good in her first film Olave Mandara, but has not been used properly in her second film.

All other artists have performed the roles with ease.

There is only one song in the film and Sadhu`s background score matches the mood of the fim. Nothing extraordinary can be said of the camera work, but director Srivatsa`s shot-composing is quite good.

Dialogues could have been a little more effective.

Watch Dashamukha for its different type and level of experience.