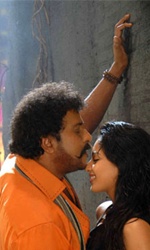 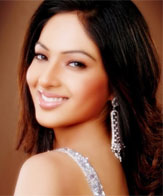 "Narasimha" is the remake of Tamil hit "Maasi", released over a decade ago with Sharath Kumar in the lead. The film was also made in Telugu with Rajashekhar as "Simha Rashi".

In both the films, which became hits after their release, the flashback sequences that come after the interval, were the best part of the whole film. The trend continues in the Kannada remake too, and chances are that this film may also become a hit.

Director Mohan has not pretended to make a film for critics` liking. He has made a film for what he calls as ardent Ravichandran fans, who look forward to nicely picturised songs, a bit of comedy and emotions and a few fights.

"Narasimha" has all these elements in right proportions, and Mohan also makes a good
impression as a writer by his effective dialogues.

The film narrates the story of Narasimha, a do-gooder in the entire village. His writ runs in the neighbouring villages also. Any politician who wants to win in his base has to deliver the promise of service and should face consequences if one fails to do so.

He confronts Rudrappa, a political aspirant who wants to win from this constituency. When Narasimha comes to know that he has a sister born out of an illegal relationship of his father, he brings his sister to the palatial house built in front of his slum dwelling.

Narasimha is liked by a city girl Varsha, but he keeps away from all her overtures. Meanwhile Rudrappa`s brother gets married to Narasimha`s sister and that brings in lot of tensions in his family life. He faces a big challenge to keep his righteous image. How Narasimha comes out of all his problems forms the rest of the story.

The flashback portions in the film post-interval engage the audience totally into the narration, even thought the film`s story is predictable.

"Narasimha" had made news for the fact that music director Hamsalekha had worked for a Ravichandran film after a long time, and Hamsalekha`s lyrics are once again the major attraction.

The picturisation of Nikisha Patel`s two glamorous songs and another number featuring Ravichandran and actress Sanjjana, is sure to titillate the front benchers.

The comedy sequences in the film are freshly written for this remake film.

Sadhu Kokila and gang really entertain the audience, but it may not be much to the liking of the multiplex audience.

Ravichandran is a little fat for the role, but he carries himself well in the confrontation sequences with Ravishankar. As for as the songs and fights are concerned, he gives the right emotions.

Nikisha and Sanjjana are just shown as glamour dolls in the film, while Ravishankar and Shobharaj are too good in the roles of villains. All the other artists have performed their roles with lot of ease.

The whole film may appeal largely in smaller towns and centres, but the story content and its narration may fail to hold the interest of enlightened audience.