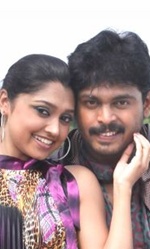 "Magadi" is a pain in the neck for reviewers as much as for viewers. The title and the film`s poster itself had indicated that the film may lack any fresh elements and be a run-of-the-mill project. But it beats even normal expectations.

Many weakly-knit sequences in the film make the viewers angry.

It may well be the worst film to be released in the last three months and you pity an actor like Deepak, who did a promising role in "Shishya`.

The story revolves around Magadi and Pavithra, two childhood buddies who were separated due to circumstances in their younger days. The one thing that binds them is a song "Naavaaduva nudiye Kannada nudi". As a youngster, Magadi used to sing it to impress Pavithra.

When they grow up, Magadi starts working with a don, while Pavithra is being looked after by a cruel-minded prostitute.

Situations lead Magadi to protect Pavithra in the house she lives in as she faces trouble from some hooligans. The song unites the childhood buddies. What happens later when the two lovers want to unite and settle for a marriage forms the rest of the story.

With such a silly story, it is difficult for any actor to rise above the meaningless script and give a good performance.

Deepak tries to act, but is handicapped clearly by the film`s content. However, he is good in some action sequences.

Malayalam girl Rakshitha is wasted in the film and she has only a few songs and sequences.

"Magadi" also shows how a large number of Kannada films made with under-equipped writers and directors are bleeding the industry. Replete with shortcomings, it is a badly performed, directed and written film, weak in its technical values.

A stretched narration of a non-existent story, stereotyped dialogues and boring song and action sequences make you yawn in the theatre.

Director Suresh Goswami has not only failed to write a good script, but also uses his available technical crew in a haphazard manner.

Even the characterisation of the hero and heroine is not well defined. As for the other characters, most of them shout in all the sequences - the director seems to have allowed them full freedom to do whatever they feel like.

Rajesh Ramanath`s music is also ordinary, and the cameraman also fumbles in his work.

Even if you have lot of time and are an ardent film buff, "Magadi" must be avoided.